Parents were ‘scared’ of son accused of killing cop 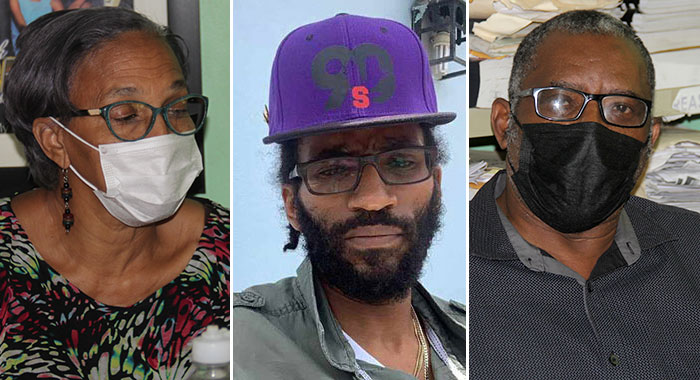 The parents of Gleason Lewis, 36, who police shot and killed in Campden Park on April 26, 2020, are now saying they were scared of their son and that a psychologist had warned them that being around him was “dangerous”.

They, however, blame “reckless and irresponsible behaviour” by the police for the death of their son and the death of the detective he is alleged to have shot and killed.

Mr. & Mrs. Glasley Lewis spoke at a press conference in Kingstown, on Tuesday, at which they suggested that police had murdered their son after what the Lewises claim was the friendly fire death of detective Sergeant Philbert Chambers at their house.

Police have said that they shot and killed Gleason after he shot and killed Chambers, 30, and injured Police Constable 700 Verrol Sam, both of whom were among officers attempting to execute a search warrant at the Lewis home.

The investigation into the shootings is yet to be complete, and a coroner’s inquest into the deaths, a legal requirement, is yet to be held.

The Lewises, who were not at home when the shooting took place, spoke this week alongside their lawyer, Kay Bacchus-Baptiste, all of whom called for the holding of the coroner’s inquests.

“The reason why we are here is because of the way they treated us. Not us alone, but I think Sergeant Chambers is a citizen of St. Vincent and the Grenadines also and I don’t think the matter was treated in the right way,” Mr. Lewis said.

“And if it wasn’t for their reckless and irresponsible behaviour, I think Sergeant Chambers and my son would have been living here today.”

‘signs of being mentally unstable’

Mr. Lewis said his son was “sick … was showing signs of being mentally unstable…

“In the first case, we went to them for help because we were scared and all that. We went to [psychologist] Dr. Joselle Miller first and she advised us what to do.

“And then, when we saw he was really carrying on, because he chopped up the truck and that sort of thing, so my wife got real scared and that forced us to go to the police at Questelles.”

Mr. Lewis told the media that he told the police that his son was showing signs of mental illness and sought their assistance in taking him to the emergency room.

Mrs. Lewis said that the police asked them if that was all that they wanted and they said yes.

She said they requested this help on April 23, three days before their son and Chambers would die.

“If you are sick in St. Vincent, there must be some process. And if we ask for help, you have to know how to deal with somebody who is mentally disturbed. You can’t just come with guns and start to shoot.”

Mrs. Lewis said that officers from the Questelles Police Station had responded to their request and went to their home three days before police would kill her son.

“And when they came, they told him they are going to take him to the doctor. And he told them he is an American and his doctor is in America”.

She said that the officer left and went back to the police station.

Sometime after 5 p.m. that same day, April 23, 2020, the Lewises were heading to Buccament when they got a call from the police telling them to come to the station.

“When we got there, we asked them what it is. They said, ‘Just go home.’

“So I said to my husband, ‘Just go home?’ and we started driving and we went around.”

She said she did not go into the property but when her husband went, he met four officers from the Rapid Response Unit, a tactical team whose members are always armed.

Mr. Lewis said that by this time, Gleason had “come down from upstairs and there is a gate like, he jumped over there and went down the road.

“One of them said he gone down so. So they said, ‘Okay. We’re not gonna go behind him.’”

He said that the officers left without trying to apprehend Gleason.

Mr. Lewis said that neither he nor his wife were at the house when their son was killed.

He said they received a call around 8 a.m. the Sunday from one of their daughters in Canada saying that “police shooting up the house and so forth.

“When we got there initially, the whole place was cordoned off and police was on the main road. They told us that he (Gleason) is dead.”

Asked, on Wednesday, to comment on the Lewises’ statements, Commissioner of Police Colin John told iWitness News that policing could be “a thankless job”.

The police chief contrasted the Lewises’ comments a year after the death to what he said they told him in the hours after their son’s death.

“The father told me personally when I was going onto the scene, he said, ‘Officer, it’s four days I have been in this same suit of clothes because I had to run from this house because of my son’,” John told iWitness News.

The commissioner said that despite the objections of some of his investigators, he personally invited Mrs. Lewis and two of Gleason’s sisters to witness police search of the body at the scene.

Mrs. Lewis confirmed at the press conference on Tuesday that police retrieved two firearms from her son’s body and a sock containing what they told her were “bullets”, but which she had thought were “batteries”.

“The mother actually said she now realised why he was always pulling up his pants and he always appeared bulky around his waist when he was in the house. She said that to us,” John said, recalling what had occurred at the scene.

“So, instead of her being there [at the press conference] lamenting the actions of the police, if it was not for the police, she may not have been there to speak what she was speaking there today, because it seems as if the guy, he was on a mission to kill both of his parents, based on our information and intelligence,” John told iWitness News.

“He had ammunition in a sock and in another small bag. I was there. Actually, some of the investigators, they were against me inviting her there. But I said, ‘No. Let us invite her down there when we are going to search him.’

“I called her down. I personally invited her — she and two of the sisters. One came down and that one started crying very loudly and they had to move that one from the scene. But the next sister and the mother stayed there and she witnessed when we searched him and we showed them what exactly we recovered from the body.”

On Gleason’s Instagram account, there is a photograph, purportedly of him, in which a face is not visible, with what appears to be two firearms on the ground.

A police source has told iWitness News that the firearms found on Gleason’s body resembles those in the Instagram image.

The source said that the photos were taken inside the Lewises’ house where their son had been living with them until his return to the United States, where he lived permanently, having been delayed by the COVID-19 pandemic.

The Instagram account also includes images, supposedly screenshots from surveillance footage, of police officers outside the Lewises’ home, including one in which Mr. Lewis is standing next to the officers.

At the press conference, Mr. Lewis said he did not know his son to be in possession of firearms.

“No. Even though he had them, he hid them. We never had a clue that he had those things. He is an American citizen and he’d bring down all sort of things.  You know these young people. And then he don’t do things for us to see because [he] is our boy. But you can’t give children your mind and so on. People depart from thing. I’ve just never seen him with a gun.”

Mr. Lewis was asked what he would say to people who say he had been told that being around Gleason was “dangerous”, but he still doubts that Gleason shot and killed Chambers.

The lawyer, Bacchus-Baptiste, volunteered to answer that question.

“That is based on the evidence of witnesses who were around. The main thing is that police, in their report — and that’s why I read that report, that the police put out — why would they shift where he was shot from outside, to make it appear that he went into the house and he was shot.”

‘No blood at all was inside’

Bacchus-Baptiste said a letter captioned “To whom it may concern”, written by the commissioner, said:

“On arrival, Gleason Lewis was met at home. The police identified themselves and informed him of the search warrant. He locked himself in the house and refused to open. The police attempted to force open a kitchen door. Sergeant Philbert Chambers entered the house and received a single gunshot injury to the left side of his head. Another officer, PC 700 Verrol Sam received a gunshot injury to his left leg.  Other police on the scene recognised Gleason Lewis was armed and returned fire at him. He was shot multiple times and succumbed to his injuries. Philbert Chambers also succumbed to his injuries on the scene.”

She said that Chambers was never shot in the house.

“There was not even one stain of blood in the house.”

“Where the police was shot, they moved the police and put him another place. He was moved.”

“He was moved,” Bacchus Baptiste said.

Contrasting the alleged letter to the official police release on the shooting, the lawyer said:

“This came from the Commissioner of Police and it has on it a lot of it that is not true. They wanted to make it appear that the officer entered the house and then he was shot in there and the other one was shot outside. That is what is disturbing.”

Mrs. Lewis said her son was shot outside the kitchen door and half of his body inside and half on the step.

“Shoot out his eyes, shoot off his hands, because like he surrendered because there are bullet holes in his hand and they shoot his two hands off…”

“No blood at all was inside,” Mr. Lewis added.

Mrs. Lewis said a neighbour had told them that Gleason had come out and asked the police, “Where is the warrant?”

Mr. Lewis said that the neighbours do not want to come forward because it seems like they are afraid.

“From since the thing happened, everybody just keeps away from us. They’re just keeping away from us,” he told the media.

Mr. Lewis said that his house still has all the bullet holes from the shooting, and the only repairs he did was to replace the kitchen door.

“It is very painful. Every day I wake up, it is like a pain. It is a real mental blow you’re getting,” Mr. Lewis said.

“All we can ask them is for due process, to do what they are supposed to do. Do what is in the law to bring a closure in the thing,” he further said.

Bacchus Baptiste said that the sadness about the shooting situation is that it could be repeated again.

“That’s what I am saying about the recklessness of it…” she said and accused the police of “trying to cover it up”.