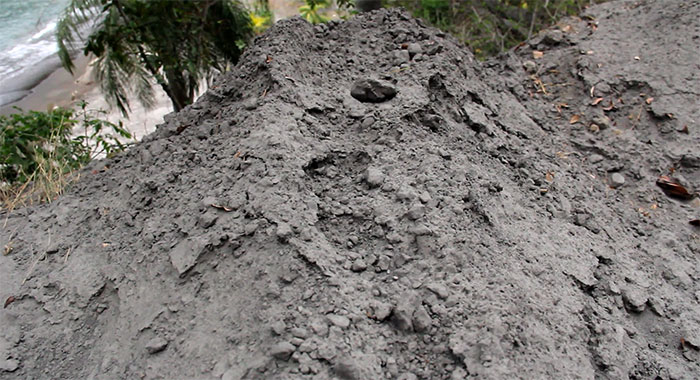 A return to volcano Orange and Red Zone communities before they are cleared of volcanic ash could be a “second disaster,” the opposition leader has warned.

“It has to be taken seriously,” Godwin Friday said on his New Democratic Party’s programme on NICE Radio, on Monday.

“We are keeping our fingers crossed, we are hoping that the volcano has done its worst,” he said, referring to the explosive eruptions of La Soufriere over two weeks beginning on April 9.

Friday said he has heard reports indicating that the worst of the eruption is over.

The government has given the all clear for persons to return to Orange Zone communities, except for Chateaubelair and Fitz Hughes, in the northwest.

In the northeast, the all-clear has been given for return to all Red and Orange Zone communities south of the Rabacca Dry River.

However, last month, some people in Orange Zone communities in North Leeward complained that they were given the all clear to return even before public spaces had been cleaned.

The situation had resulted in large amounts of volcanic ash being remobilised by the wind.

Scientists have warned about the dangers of breathing volcanic ash.

Friday said that people shouldn’t feel that they have to leave the emergency shelters “or be pushed away from the centres because they feel they are not being properly looked after or that it is being done grudgingly.

“The important thing is to make sure that people are safe, those in the red zone … and that when the time comes for them to return that the clean-up is done, not while they are there, but before.

“… the health consequences of rushing to get back into the Orange Zone and the Red Zone without proper cleaning up can turn out to be a second disaster from this eruption.

The opposition leader said he was in Georgetown last week and saw that while the streets had been cleaned, there was still volcanic ash in many people’s yards.

“And the point I want to make here is that we cannot treat the clean up as though it is a public-private matter, where you say if it is the road, if it is a school, then the government going do it, but if it’s in somebody’s backyard and somebody’s front yard, then that is your private business.”

He said that if one person’s property is clean and a neighbour’s is not, the whole area gets dirty again.

“So if government spaces are clean but private spaces people can’t afford to clean them, they can’t hire people to do them quickly enough, it will eventually go back into the public spaces.”

The opposition leader said he would like to see an approach adopted “where the clearing up of the ash, no matter where it is, is a matter of national concern, and the primary responsibility lies with NEMO and BRAGSA and whomever else is in the state apparatus to get that done.’

He also called on state agencies to use as many local people as possible in the clean-up effort.

“But the partition, the separation of spaces in terms of private and public, to me, that is only going to make the clean up more haphazard and prolong the problem that we are having now with the ash and dust in the air,” Friday said.

“This needs to be a national matter, a national concern and the government, the various agencies take the primary responsibility for doing it, no matter where the ash lies,” the opposition leader told listeners.