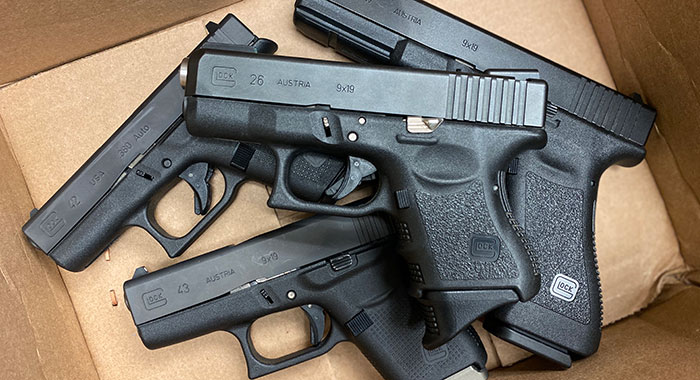 Leader of the Opposition Godwin Friday has expressed “serious concern, grave concern” about the disappearance of firearms and ammunition from the armoury at the Georgetown Police Station.

“This is a very serious matter when we consider the gun violence that is taking place in this country,” the opposition leader said on his weekly appearance on his party’s show on Nice Radio on Monday.

He noted that he was speaking at a time when the nation is focused on the April 13 shooting of Diamond Estate resident Cornelius John, 60, at his home.

John has said that Senator Ashelle Morgan, a lawyer and deputy speaker of the house of assembly, was among the three persons who came to his home uninvited when he was shot.

Police have named Morgan and Assistant Director of Public Prosecution, Karim Nelson as persons of interest in the shooting.

The identity of the third person has not been disclosed.

However, no one has been charged.

“That is gun violence,” Friday noted, speaking of the shooting of John.

“We have had cases, recently; the national football player, goalkeeper, Dwaine Sandy was gunned down in a public place. That is gun violence.

“I am told there was another shooting over the weekend. I have seen this in the online posts of a person in Camden Park. Again, gun violence,” he said, referring to the killing of Jemark “Parch Nuts” Jackson, last Friday night.

“When you hear this situation where guns and ammunition gone missing from the police station, you ask yourself, ‘Where are they safe?’”

Police have announced the disappearance of firearms and ammunition from the armoury at the police station.

They, however, gave no information about the type of firearms and number of rounds of ammunition, the time frame in which they are believed to have gone missing, nor when they were found missing.

On Tuesday, former Prime Minister Sir James, on Tuesday, said that he was reliably informed that three Glock automatic pistols, an M4 rifle, and over 1,000 rounds of ammunition are missing from the Georgetown Police Station.

Commissioner of Police, Colin John, however, told iWitness News that he would neither confirm nor deny the former prime minister’s comments.

On Monday, the Serious Offences Court heard that two pairs of slippers and a gold chain, which are exhibits in a robbery case, are also missing from the Georgetown Police Station.

The opposition leader said that the disappearance of the firearms “has to be looked into very, very urgently and the public has to be kept abreast of what’s happening.

The opposition leader questioned what is happening with the police force.

“The responsibility for these serious matters that undermine public confidence in the police service, they got to go right up to the top, to the commissioner and to the minister of national security.”

He noted the recent claim by two women that police beat them at their home in Glen during a raid.

“I have spoken to those women; I heard their first-hand account of what happened. It is grotesque, should those allegations prove to be true and they need to be investigated.

“They sounded very forthright in the telling of them. They need to be investigated so that the police can be held accountable as well, if this matter proves factually what was related.”

The opposition leader also spoke of reports of a young man who was stopped in a traffic incident and allegedly brutalised by police.

“First you have this situation with the Cornelius John matter, which, after eight weeks, nobody is charged, detained, people are still in the dark as to who the third person is. And now we have the weapons that are missing from the armoury in Georgetown.”

Friday noted that St. Vincent and the Grenadines has recorded 18 homicides this year.

“And these things, they sort of get pushed aside because there are so many other alarming things happening in this country. It’s like if the whole place falling apart and nobody seems to be paying much attention to something that ordinarily would have gotten a lot more attention in saner times.

“But there are 18 homicides thus far this year and a number of them have been committed with guns and we don’t make guns in St. Vincent,” he said.