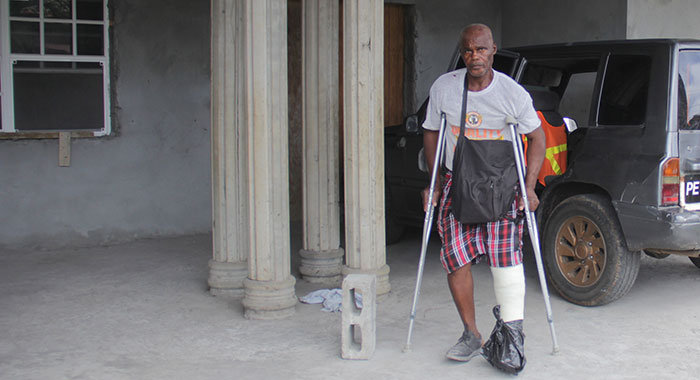 Leader of the opposition Godwin Friday has written to regional and international organisations about the April 13 shooting of Diamond Estate resident 60-year-old Cornelius John.

Police are yet to make an arrest or charge anyone in connection with the April 13 shooting in which government senator and Deputy Speaker of the House of Assembly, Ashelle Morgan as well as Karim Nelson, an assistant director of public prosecution (DPP), have been implicated.

Friday disclosed at a press conference on Tuesday that he dispatched, on June 9, letters to

“It has been eight weeks since the shooting incident occurred. Yet, no arrest or detention has been made by the police. This unusual delay has shaken public confidence in the ability of the Commissioner of Police and the Director of Public Prosecutions to investigate and prosecute this matter in a timely and transparent manner and to ensure that justice is done,” the opposition leader wrote.

Friday said it is well known that justice must not only be done but must be seen to be done.

“On behalf of the people of St. Vincent and the Grenadines, I rely on your commitment to good governance, the principles of justice and the rule of law and urge you to look into this matter. We seek to uphold the sacred principles promoted by our laws and democratic traditions that no one is above the law and everyone is treated equally by the criminal justice system,” he said.

“Further, as a current member of the UN Security Council, St. Vincent and the Grenadines must welcome scrutiny of its own administrative and legal practices to guarantee that they meet the standards of good governance and the rule of law.

“I beg you to use the legal and moral authority of your office to inquire into this very serious matter so as to ensure that the administration of justice runs its true course and the rule of law is respected in St. Vincent and the Grenadines.”

In the letter, the opposition leader noted the public comments by Prime Minister Ralph Gonsalves, and his press secretary, Sehon Marshall, who is also Morgan’s uncle, about the shooting.

“In our view, those comments were ill-advised and premature and could well prejudice justice, especially as the matter was said to be still under police investigation. They have fuelled concern among members of the public about the implications they hold for the administration of justice in our country,” Friday said.

He said that the shooting “has stirred the conscience of our nation and fuelled serious doubts about the administration of justice and the rule of law in the country.

“It is feared that unless regional and international attention is drawn to it, proper investigation of the matter will be stifled, the truth will remain concealed, and justice will be denied”

The opposition leader noted that the identity of the third person who is said to have been present when John was shot at his home has not been made public.

He further pointed out that it took two weeks for the matter to become public, despite John’s report to police.

Friday also pointed out that while Nelson has taken leave of absence, Morgan remains in her senatorial post, and can be removed by Prime Minister Ralph Gonsalves.

The opposition leader said that Gonsalves, who is also minister of national security and legal affairs, has commented on the matter, revealing that Morgan called him after the incident.

“In his comments, he offered possible explanations for the conduct of the alleged assailants that appeared to be in support of the senator,” Friday wrote.

The opposition leader said that Marshall’s public comments “offer an interpretation of the allegations to support Senator Morgan”.

Friday spoke of his efforts, on May 11, to get Morgan to withdraw from Parliament, pending the outcome of the police investigation.

“No action was taken against Senator Morgan. However, for my efforts, I was suspended from the sitting of the House.”

He further pointed out that as parliament met on that same day, members of the public engaged in peaceful protest concerning the matter.

The opposition leader told Tuesday’s press conference that he expects that the recipients will all respond to the letter.

“But, even if they do not, it is still important that I wrote because now we are certain that they know about the matter. And if our worst fears come to pass, they will not be able to say they did not know.”

The opposition leader said that the matter continues to be of paramount importance to the people of SVG “because it is a matter of private justice for the individuals involved, but it is also a question of how our administration of justice is done in our country and how the rule of law is applied equally to all in St. Vincent and the Grenadines.

“This is a question, I say, repeatedly, that we all must be concerned about and cannot let rest. As Mr. John said, today for me – I am paraphrasing here — tomorrow for you.”

He said that if citizens cannot rely on “the proper functioning of the system, then we are surrendering fundamental rights that are guaranteed under our Constitution and run a dangerous course that our country would become one not governed by the rule of law, but the power of men and women; those who are in high office.

“We cannot have that and this is why so many people have taken an interest in this, writing in the media, writing in newspapers, commenting online and I urge them to continue to do so. And I urge all Vincentians of conscience to raise their voices. It is not enough to simply sign quietly or silently and say, well , at least I am not supporting it. It requires more from all of us as citizens to protect our rights now and into the future.”

One reply on “Opposition writes regional, int’l groups about shooting”