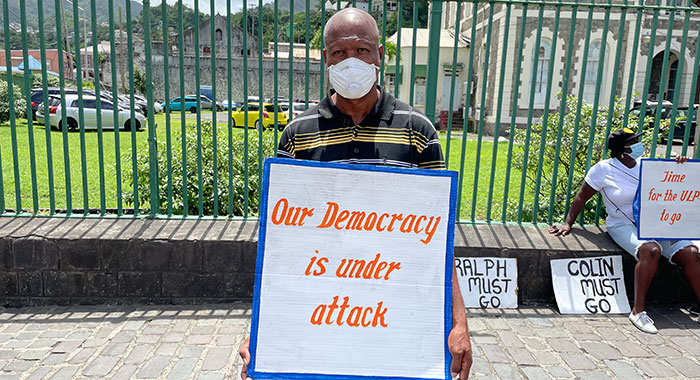 President of the SVG Teachers’ Union Oswald Robinson at the protest on Wednesday. (iWN photo)

Democracy in St. Vincent and the Grenadines is under threat, according to a placard that Oswald Robinson, president of the Teachers’ Union displayed at a protest in Kingstown on Wednesday.

“Because of all the issues that are impinging on our fundamental rights and freedoms in this country,” Robinson told iWitness News when asked about the statement.

“The issue of upholding law and order. We can’t have a situation in our country where a man is sitting in the comfort of his home and being shot and it is taking so long for justice to be realized.

Robinson was speaking about the April 13 shooting of 60-year-old Diamond Estate resident Cornelius John at his home.

Assistant Director of Public Prosecution Karim Nelson and Deputy Speaker of the House of Assembly Ashelle Morgan have been identified as persons of interest in the shooting, but no charges have been laid.

Police have not disclosed the identity of a third person who is said to have been present at the time of the shooting.

Robinson told iWitness News there are “many other issues affecting us, threatening our democracy, our right to conscience.

“You want to mandate certain things upon us as if we do not have freedom of conscience under the constitution and those are just a few examples of some of the threats to our democracy.”

He said that in joining the protest he is calling for justice for all.

“The current situation with Mr. John is a crucial one. That is just one of many examples. You have police approaching people in their domains, pointing guns at juveniles and we want all these things to stop. And the sooner these things are stopped, it’s better for law and order.

“We do not want to be seen as a reckless nation where those who ought to be upholding the law appear to be not doing so. So the nation must rise up and speak up and stand firm and be united in a just cause for equality, for justice and protection of our fundamental rights and freedom,” Robinson told iWitness News.

One reply on “SVG’s democracy under threat — union leader”