Storm strengthens as it nears SVG 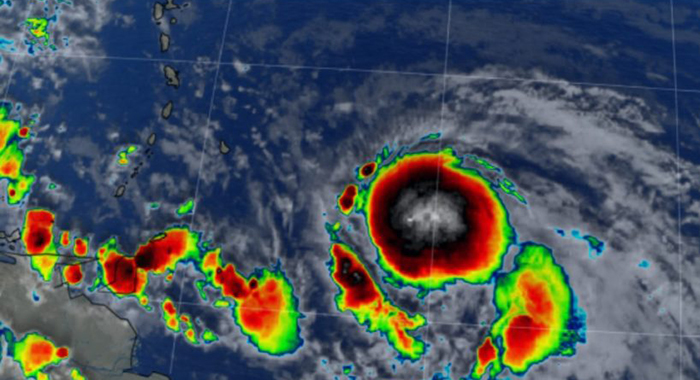 A tropical storm warning remains in effect for St. Vincent and the Grenadines (SVG).

Maximum sustained winds have increased to near 60 mph (95 km/h) with higher gusts, with tropical-storm-force winds extend outward up to 140 miles (220 km) from the centre. The estimated minimum central pressure is 1001 mb (29.56 inches).

Movement is toward the west-northwest near 28 mph (44 km/h) and the centre of the system is expected to pass near or over SVG late Friday morning.

Sustained surface winds between 39 to 60 mph (62 to 95 km/h) with higher gusts are expected to spread across SVG Friday morning; persisting into the evening with pockets of intense showers and thunderstorm activities. Rainfall accumulations of at least 3 to 6 inches (75 to 150 mm) are possible with isolated higher amounts.

This rainfall could cause life-threatening flash floods and mudslides.

Residents in areas prone to flash-flooding and landslides or near rivers and streams should be prepared.

Large northerly to south-easterly swells peaking near 5 metres (16 feet) are also forecast to accompany the system. Low-lying coastlines around the islands will be particularly vulnerable at times of high tide. High tide is expected at 1 p.m. Friday. Large waves and dangerous rip tides can be expected. These will create unsafe conditions for small-craft operators and fishermen.

A high-surf advisory and small-craft warning are in effect until 12 noon on Sunday. Small craft operators are advised to remain in port. Sea-bathers and other users of the sea are advised to stay out of the water.

All preparations for the arrival of Tropical Storm Elsa should be completed, and residents should continue to keep updated on the progress of this system. The next advisory will be issued 8 a.m.

SYNOPSIS AND FORECAST CONDITONS valid up to 12 noon