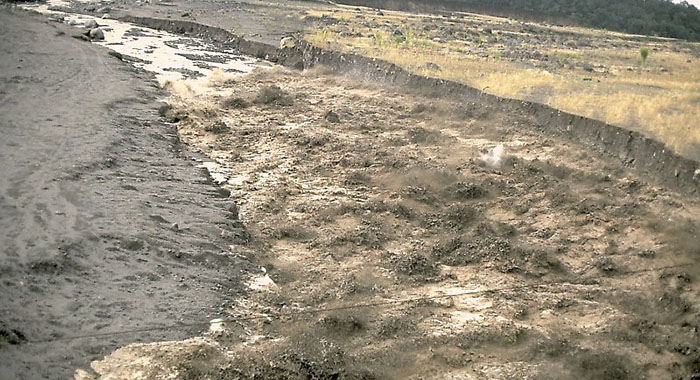 A Wikipedia photo of a lahar.

The National Emergency Management Organisation (NEMO) is reminding people who frequent the communities north of Rabacca Dry River of the dangers of mudflows as a tropical storm approaches St. Vincent and the Grenadine.

NEMO said that in the communities north of the Rabacca River up to Fancy, heavy rainfall can result in dangerous lahars and mudflows and that these areas remain restricted.

The government is yet to give the all clear for people to re-occupy communities north of Rabacca Dry River, following the explosive eruption of La Soufriere in April.

However, people are permitted brief visits to attend to their properties, if weather and other conditions permit.

NEMO said that lahars (mudflows) continue to pose a dangerous threat to the river valleys surrounding the volcano including Wallibou, Rabacca, Sandy Bay and Owia.

“Residents are asked to limit or avoid visiting these areas at this time,” NEMO said in a press statement.

“The heavy rainfall can result in flooding, lahars and mudflows especially in areas that had significant ash fall. Since the explosions ended on 22 April, 2021, remobilisation of ash, blocks, bombs and other fragmentary materials by rainfall has produced mudflows (or lahars) which have, in turn, incorporated material from the pyroclastic density currents (pyroclastic flows),” NEMO said.

“This has caused significant amount of erosion in the lower valleys and in some cases have resulted in mudflow deposits now covering the hot pyroclastic density currents deposits, particularly in the lower parts of the valleys.

“It is expected that whenever rain falls, there will be significant steaming, particularly in the valleys where pyroclastic density currents have come down. The pyroclastic density currents can result in warm or hot mudflows, which will also steam. This means that it would not be unusual to have significant steaming in some or all of the valleys on the volcano.

“Also, while this steaming would be mainly focused in the upper parts of the valleys, due to the fact that the mudflows can also steam, the steaming can extend all the way down the valley to the coastline.

“The National Emergency Management Organisation and the St. Vincent and the Grenadines Meteorological Services will continue to monitor and provide update on the potential tropical storm.”