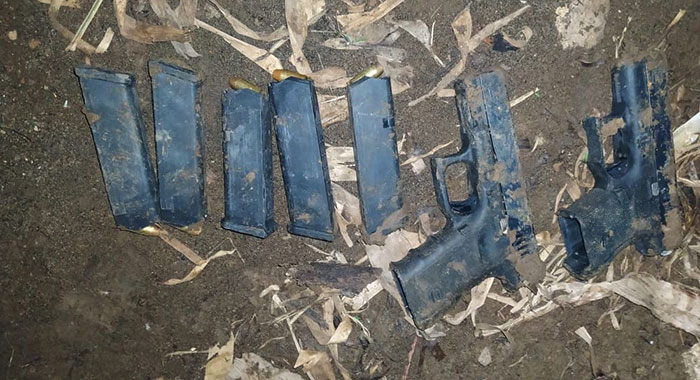 Police have netted two firearms, six magazines, and 87 rounds of ammunition in Glen as part of a homicide investigation.

On July 6, a party of Rapid Response Unit (RRU) officers uncovered one Glock 27 pistol, one Glock 23 pistol, five magazines and 73 rounds of .40 ammunition.

A search the following day netted one magazine containing 14 rounds of .40 ammunition.

Police said on Monday that investigations into the discovery are continuing.

The discovery of the firearms and ammunition comes amidst a number of killings in Glen over the past few weeks.

A number of killings in the Glen area or of Glen residents in recent weeks are the result of an ongoing feud between rival groups, sources in the know have told iWitness News.

On July 3, police arrested and charged Lejah “Soups” Alexander, a 34-years-old labourer of Glen with the June 29 murder of Raheem Durham.

Durham, a 20-year-old bus conductor, also of Glen, died after being shot twice in the head in the East St. George community.

Alexander was arraigned at the Serious Offences Court on July 5 and has been remanded to prison until Sept. 30 for a preliminary inquiry.

On May 21, Dwayne Sandy, a 33-year-old labourer, of Brighton/Glen, was gunned down in Calliaqua.

Two masked assailants shot Sandy, a national footballer, shortly after he arrived at a shop in the East St. George town.