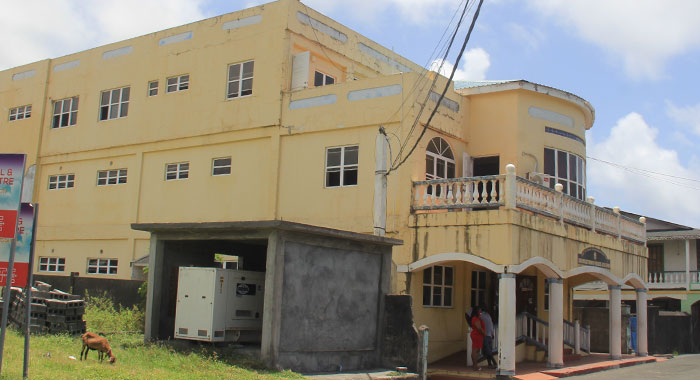 The lawyer representing the former police officer charged in the connection with the theft of guns and ammunition from Georgetown Police Station is asking to see the firearms diary, armoury records, and the visiting officers’ log at the station.

Grant Connell made the indication, on Thursday, at the Colonarie Magistrate’s Court, sitting in Georgetown.

The lawyer further said that he would wish to walk around the police station, a request that Magistrate Bertie Pompey said should be directed to Commissioner of Police, Colin John.

Connell made this request after the court ordered disclosure by Aug. 16 and set Aug. 26 as the next date for hearing in the charges against Zackrie Latham, of New Grounds.

Before the magistrate’s order, there was some back and forth between the defence, the prosecution and the court over what order had been made at the last hearing.

Connell, citing his notes, said that the court had ordered disclosure by July 22.

But the magistrate and the prosecutor, Corporal of Police Charles, said that no date for disclosure was given but July 22 was set for the hearing of an application by the defence.

Before the magistrate’s order for disclosure by Aug. 16, the prosecutor said that the Crown would endeavour to disclose but could not have done so as the file and information had not yet reached the Office of the Director of Public Prosecutions (DPP).

The prosecutor said he had made numerous efforts and would endeavour to make disclosure as soon as possible.

He asked for an adjournment so that disclosure could be made to the defence.

But Connell countered that it was “frightening” that charges of that magnitude had not reached the DPP’s office.

He asked whether it was that a senior police officer brought the charges without the DPP’s final word.

But the prosecutor said he was “very much sure that DPP, in her wisdom, will make sure that everything is correct when bringing charges against this particular individual”.

Charles again made an application for an adjournment, adding that the prosecution would endeavour to disclose “as soon as possible”.

Connell said that the court could then see why there is a breakdown in the justice system.

He said it is public knowledge that his client is jointly charged with someone who has already been sentenced,

The lawyer was referring to Avi King, one of two men with whom Latham is jointly charged on some of the counts, who was, on Tuesday, jailed for two years and eight months, having pleaded guilty to all but one of the 11 charges against him. After his sentencing, the prosecution withdrew the charge to which King had pleaded not guilty.

Connell said that he could not understand that a case that borders on a breach of national security had not reached “the highest office in the land yet”.

“And to add insult to injury, a man has been sentenced already in a case in which the prosecution and the police have not properly investigated or concluded their investigation.”

The police investigate matters by “hoping for the best, tip off and guilty plea”, Connell said, adding that the DPP’s office should have just written to him and say they have nothing for him and he should not attend the hearing in Georgetown.

However, the magistrate read his note, saying that the case was adjourned to July 22 and “disclosure ordered”.

“For when?” Connell said.

Pompey then ordered disclosure on or before Aug. 16 and adjourned the matter to Aug. 26.

He told the prosecution that he would not countenance any sort of tardiness on their part.

The magistrate further said that last Thursday was for the hearing of a defence application.

Connell then told the court he would need disclosure of the firearm diary, the record for the armoury, and the visiting officers’ register.

“And I am at liberty to indicate to my friend what other diaries I need by that date also,” Connell told the court.

He further said he would need “to make some rounds around the building” adding that he might need to write to the commissioner as he was not sure that an order of court would permit him to do it.

“Would the order of court permit it?” Connell asked.

Pompey said that the request was unprecedented and Connell said that maybe going to the commissioner with such a request may be an issue.

The lawyer’s comments came during a hearing in which Pompey denied an application to recuse himself from the case.

In making the application, Connell had noted that Pompey is a retired deputy police chief and had spent over 30 years as a police officer.

The lawyer reasoned that the magistrate would have knowledge about certain procedures that may arise during the trial.

Connell, in making his application, had further pointed out that the court is located in the same building as the locus — the Georgetown Police Station.

Pompey said that access to the police station is a matter of security, which falls under the purview of the police chief.

But Connell said he would be “perusing the court”.

“I am at court now,” he said, adding that he had a right to walk around the court and asked whether his point about the location of the trial was then clear.

However, the magistrate said that the court was in the four corners of the section of the building where the proceeding was taking place.

“The station cannot be the court,” the prosecutor added.

The magistrate told the lawyer that he should speak to the commissioner about visiting the police station.