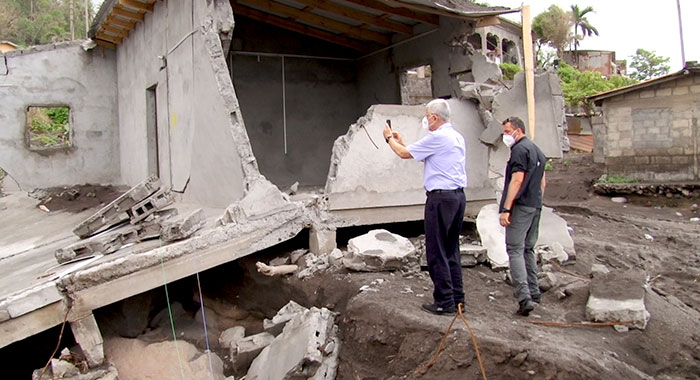 Volkan Bozkir, president of the 75th United Nations (UN) General Assembly after seeing firsthand, on Monday, the devastation after the explosive eruptions of the La Soufriere volcano, said: “We are all looking to a better future.”

Bozkir visited St. Vincent and the Grenadines primarily “to see this place and to share my regrets and my sorrow on what happened to this beautiful country and wonderful people here”.

He said that the impact of the volcanic eruptions was “more than I thought”.

Bozkir commended the government for its management of the evacuation exercise, adding, “It’s also good to see that the government is handling the situation with whatever capacity they have.

“I am very glad to see that nobody died and it’s also a success of the government to organise smooth evacuation so that nobody has died — lives are more important than anything else, everything can be recovered but while lives cannot.

He expressed thanks to Deputy Prime Minister Montgomery Daniel who led the tour of the red zone.

“He’s one of the experts and who has dedicated himself to the welfare of this region.”

Also, Bozkir thanked the UN’s regional coordinator “who immediately organised the United Nations and the world international community to come to the help of this wonderful country and beautiful people and I am sure that this will continue”.

While in the red zone, Bozkir took several photographs, saying,  “I’ll take these photographs and messages back to New York, to the United Nations, share it with the world family.”

Bozkir and his delegation also visited Canouan and Tobago Cays in the Southern Grenadines.

Bozkir further said that “this country deserves the tourists it saw two years ago, back again.

“You have a wonderful airport.  I think it’s a success story.  It’s the biggest investment in this country.  I have visited the airport, went through it.  It is capable of, in good times, to handle all the tourists coming.”

Bozkir described the port infrastructure as “very good,” that “tourists need sunshine, resorts, friendly people and friendly country – you have all of it.”

On Monday, Bozkir and his delegation met with Prime Minister Ralph Gonsalves and other Cabinet members, visited the logistics hub at the decommissioned E.T. Joshua Airport and stopped at Rabacca Dry River and a number of other places along the way before the tour ended in Sandy Bay.