Unions call for protest against changes to public health laws 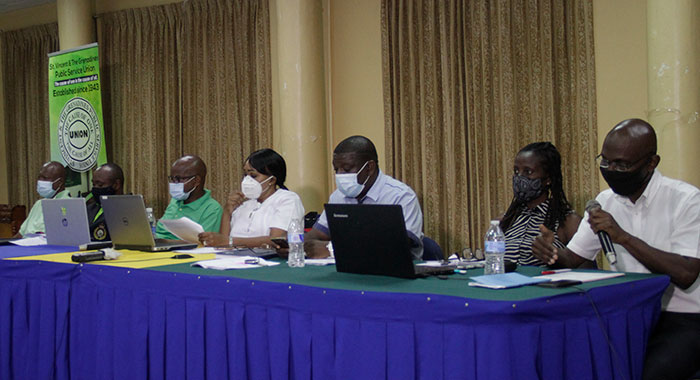 The two main unions representing public sector workers in St. Vincent and the Grenadines have called for protest outside Parliament, on Thursday, as the government moved to amend the Public Health Act.

The Public Service Union PSU and the SVG Teachers’ Union have rejected Prime Minister Ralph Gonsalves’ explanation that the changes to the law will not make vaccination mandatory for certain categories or workers.

At the same time, Brenton Smith, chair of the Police Welfare Association (PWA), which is not a trade union, said that with the bills, “We are at a crossroad in our democracy and freedom of choice and that of consent.”

Smith was speaking at a joint press conference, on Tuesday, where SVGTU president Oswald Robinson said:

“It’s more than just having an idea, an opinion.  You will be able to demonstrate it, to exercise it and to share it with others. So I want to join with our other colleagues. I call out the church leaders because this thing is also directly pointed at you. The taxi drivers, minibus operators – and I want to use the opportunity to commend minibus operators who came out and supported the last action.”

He said that the COVID-19 vaccines “have not received the authorisation from the reputable organisations” and reminded union members of their vote in April to engage in industrial action if the government makes COVID-19 vaccines mandatory for educators.

The AstraZeneca vaccine, which is available in SVG, has received World Health Organisation (WHO) approval for emergency use. However, the Sputnik V, which is approved for use in over 60 countries, including SVG, is undergoing a review by the WHO.

Robinson said the union stands by the April 2021 decision to engage in industrial action if COVID-19 vaccination becomes mandatory for teachers.

“This is still our position. It has not been changed so I am reminding our teachers that this is the time to stand up and to stand tall,” he said.

“God has given you the right to your conscience, the right to choose. So whom are you going to obey now? Man or God? I am calling on you to utilise the opportunity that you have now to stand up for your fundamental rights and freedoms,” Robinson said, adding that he knows many teachers are Christians.

At the press conference, PSU president, Elroy Boucher reiterated that his union is pro-choice as it relates to the vaccine.

“It is our position that compulsory vaccination is a step too far. Vaccination must remain voluntary… It is our view that the most effective approach is to encourage our members to make informed decisions. If workers are properly educated, they will make the decision that is best for them and for their families,” Boucher said.

Israel Bruce, lawyer for the PWA and an opposition senator, gave his interpretation of the proposed changes to the law.

“This proposed amendment is saying that even if your medical doctor, to which there is the doctor-client confidentiality, comes to the professional conclusion that this is the case for his or her client, that must then be certified by the chief medical officer,” Bruce said.

Smith, the PWA chairman, said that having studies the proposed changes, he has concluded that:

“This amendment threatens your basic human and fundamental rights. Many of you have expressed serious concerns about the issue of compulsory vaccination or the government’s latest proposal that basically will give the Chief medical officer certain amended powers as to whether you should subject yourself to any particular test or to any particular treatment.”

He suggested that if the proposed changes to the law are approved, it could set a bad precedent.

“Colleagues whilst today the issue of consideration is COVID-19, we don’t know what tomorrow, next week, next month or even next year holds. The law, as it is drafted now, is not speaking singly to COVID-19but rather to contagious diseases. As former commissioner Quow would often say, ‘Do what is right and fear no man’,” Smith said.

Boucher said that the PSU is “deeply concerned” by the proposed amendments as they “infringe on the right to conscience, beliefs and thoughts — a right which guarantees our freedom to choose what goes into our bodies and that of our families”.

He said that the changes to the laws have “the potential to impact the lives of workers, other Vincentians and our children. These amendments pave the way for the government to impose mandatory vaccination on all Vincentians.”

The PSU head said that given the seriousness of the amendments “one would have thought that there would be some consultation with the different organisations tasked with representing public officers and even workers in the private sector.

“But instead of dialogue and extensive consultation, what we got is an authoritarian approach with no regards for constitutional freedoms of Vincentians,” he said.

“These amendments must be resisted with every fibre in our being. They pose a present danger to all workers and to our children. The amendment even places decisions regarding our health in the hands of the CMO. There are persons who cannot take the experimental drug because of health reasons and not even your personal doctor who knows your medical history has the final say. If the amendments are allowed to become law it will be the CMO who has the final say,” Boucher said.

He asked parents to imagine their 12- or 14 –year-old child “being mandated to take a vaccine that not even the manufacturers can tell you of possible effects two years from now.

“The people of this country must demand that the government withdraw the proposed amendments to the public health act. I call on all public workers, all private sector workers, workers in the statutory corporations, minibus drivers, taxi operators, vendors, parents, church leaders, to stand in defence of your right to choose what goes into your bodies and the bodies of your young children. Join us in protest outside Parliament on Thursday the 5th [of August],” Boucher said.

Meanwhile, Robinson quoted the SVG Constitution and the protection of freedom of conscience. He further cited a number of

“The intention is clear from the standpoint of the Constitution of SVG that the government intends to hinder our enjoyment of our freedom of conscience and this is trampling upon a fundamental right,” he said of the proposed changes to the law.

He further noted the racial composition of SVG, including its Garifuna people and “those who came as indentured servants”.

He said that it is either the government is “short of memory or something is totally wrong” as regards its action in contrast to a number of international treaties that it has ratified, including the Universal Declaration of Human Rights, the

“The point I am making is that we still have persons in our communities who continue to hold on to their traditions from their ancestors. It is part of their belief systems. There are certain traditional medicines, which are used, which people today continue to use to maintain and sustain their health.

“Why would you want to deny such persons from continuing with these traditional medicines and to force them to take a vaccine that is still in its experimental stages?”

“Up to now, we have not received it. We are still waiting, we are still open to dialogue, but you have failed. Now, you are heading to the house of Parliament to amend this very important piece of legislation to mandate that we take a vaccine or vaccines into our bodies.

He reminded union members of the right to freedom of expression.

“You have the right to assemble with your trade union and to demonstrate in a peaceful way.  It is not anything illegal. It is something that is normal. So we call on you to support the protest, a worthy cause, not only for ourselves but for future generations to come.

“Brothers and sisters, Vincentians, this is the time you have to stand up as Joseph Chatoyer and many of the liberators in that century who have fought and fought manfully for a just cause. This is a time that we must rally together and stand together with one voice, with one determination,” Robinson said.

“This is just the beginning. The market vendors; the fisher folk, wherever you are, today, when your neighbours house is on fire, what do you do? Wet your own. We must rally together and save our nation, St. Vincent and the Grenadines by standing up and deepening our democracy and in doing so, protecting our fundamental rights and freedoms let us uphold our constitution and let us stand together and fight a good fight of faith.”