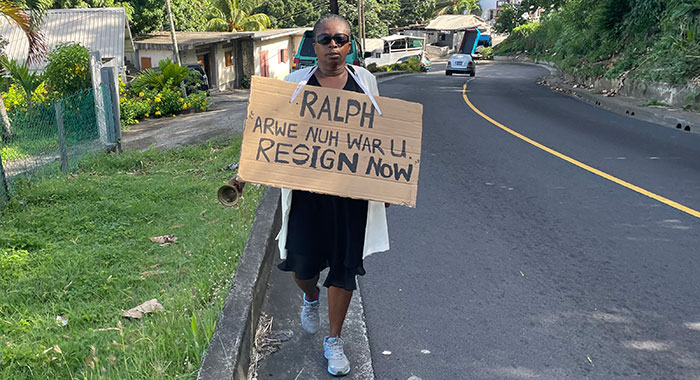 Former diplomat, Doris Charles on Tuesday walked from her home in Questelles to Kingstown, calling on the Unity Labour Party administration to resign. (iWN photo)

A former diplomat under the Unity Labour Party administration was, on Tuesday, walking from Upper Questelles to Kingstown, calling for the resignation of the Ralph Gonsalves administration.

Doris Charles, whose name was mentioned as a possible candidate for the ULP in the November 2020 general elections, in which the party won a fifth consecutive term in office, rang a bell and carried a placard as she called on the government to demit office.

“Ralph, arwe nu war u. Resign Now,” said the placard, which was written in the Vincentian vernacular. Charles also carried a bell which she rang as she walked.

Charles told iWitness News that the ULP administration should go because of their policy on vaccination against the COVID-19 pandemic and its alleged mishandling of the country’s finances.

She spoke to iWitness News in Lowmans Hill, while on route to Kingstown from her home in Upper Questelles.

Charles noted that she served St. Vincent and the Grenadines as deputy high commissioner (minister counsellor) to the United Kingdom.

“And the plight of our people, my people, have reached deafening ears, I suppose, and I am asking our government to resign and give other people an opportunity to serve in the best interest of the rest of us,” she told iWitness News.

She said that the grounds on which the government should resign are “well articulated in the news”.

“One of them is the disappearance of $95 million from the coffers of our country. The explanation that has been given is insufficient and not acceptable, not accepted.”

Last week, Leader of the Opposition, Godwin Friday, said that EC$95 million in alleged government spending between 2010 and 2015 is unaccounted for and that the matter was flagged in the latest Director of Audit Report — for 2015.

However, Minister of Finance Camillo Gonsalves said that there is no “missing money”.

“Many of us … have gone to school and have learned the differences between right and wrong. There is something wrong and it is enough to say to this administration, ‘It’s time to go.’”

She said she has a message from people in Rose Place, Kingstown, having been taken to some homes there.

“I have children myself and I am empathetic towards parents who can’t find anything to give children to eat on a consistent basis.

“I have looked at the reports in this country, one especially from your own media up all the way in the Red Zone,” she told iWitness News.

“I have also housed persons from the Red Zone and they are in dire need of attention. It’s another reason why this administration must go and give an opportunity to others who understand the economic development and sustainable development of this country.”

Charles, who has a degree in law, described as insufficient the explanation given by the prime minister regarding the proposed changes to the Public Health Act.

Ralph Gonsalves has denied that a change to the Public Health Act, to be debated in Parliament, on Thursday, would make COVID-19 vaccine mandatory.

“It is the intention of the Government, however, to make rules under the Public Health Act to require certain categories of employees in the public sector (central government and state enterprises) to take the vaccine in order to work in certain specified ‘frontline’ jobs,” Gonsalves, however, said in a press statement last week.

“… many parents who have called my home because of fear, they cannot walk with me this morning but they are here in spirit, they are saying that enough is enough. That’s another reason why this administration has to go.

“We don’t have to submit to a bill, which, if passed, will become law in this country and will say it is mandatory, in nature and operation, for some of our workers to take that vaccine. We are not stupid.

“One mother said to me, ‘We are not stupid, Ms Charles. We did not go to law school, like you did, but we understand that in operation, the law will be mandatory for many of our frontline workers to take that vaccine.’”

Charles said that she listened recently to a speech by the prime minister of Antigua, who is also “saying the same thing that people like myself who are pensioners will have to take the vaccine.

“I say no. I say no. I must still be given a choice. The choice is mine to say whether or not I must take that vaccine.”

Charles also took issue with the response of some church leaders to COVID-19 vaccine.

“Many of our church leaders have stood up and said take it, but they do not understand the implications of what they have taken, some of them.

“And on the other side, they are not allowing a full flow of information to have an exhaustive discussion about the implications of this vaccine.”

“You tell me, why then, if we are encouraged to organise locally because of economic reasons and other reasons, why we should continue to subject ourselves to just sitting down quietly in our homes and say, ‘Yeah, it is OK for us to take a vaccine.’

“Because I am going down the road you don’t know if I am a crazy person — although some persons say I am mad. But I am mad enough to take a bell this morning and ring it throughout the length and breath of this nation. We are not mad.

“We are sensible people in St. Vincent and the Grenadines. I call upon 10,000 women to stand with me to make a proclamation to make whatever it is and to tell this government it has to go. It is enough.

“Remember I said that I once supported this government but I cannot continue to support a government that has imposed some very strong, very determined efforts to continue to keep us in a state where they are going right. They are not going right. And it is about time we seek a different way of doing things in St. Vincent and the Grenadines.”

Charles called upon women, especially, to stand with her.

She said that historian Adrian Fraser, at the Emancipation rally, reminded attendees that women were at the forefront of reforms in the country.

“I would like to go down in history as being one of those reformers. Otherwise my history, our history, this world’s history will condemn me,” Charles told iWitness News.