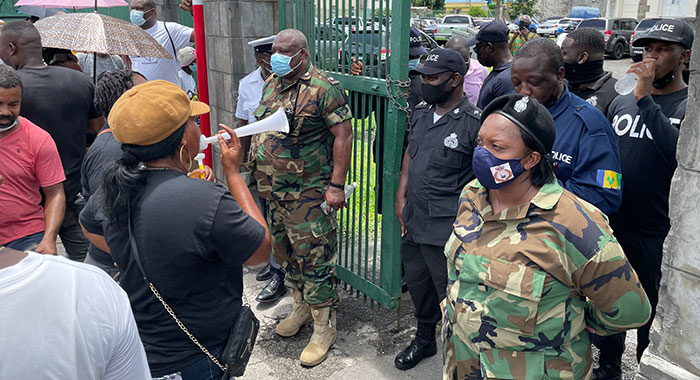 Police officers and protesters outside Parliament on Thursday. (iWN photo)

Gazetted officers in the Royal St. Vincent and the Grenadines Police Force (RSVGPF) have concluded that what they said were “purportedly ‘peaceful protests'” have become less and less peaceful.

“The RSVGPF therefore take this opportunity to educate/remind the members of the three currently active political parties, trade unions and the public at large, of the Public Order Act, Chapter 396 of the Laws of St. Vincent and the Grenadines, Revised Edition 2009,” the police said in a press statement on Thursday, to which a copy of the act was attached.

The officers came to their conclusion at a meeting last week Friday, one day after Prime Minister Ralph Gonsalves was injured as he walked among protesters on his way to Parliament.

The protesters were demonstrating against changes to the nation’s Public Health Law, which Parliament approved, amidst strong objections by the government, in the predawn hours of Friday morning.

“It is the fervent hope and sincere belief of the members of the Royal St. Vincent and the Grenadines Police Force that the leaders of the aforementioned organisations would honestly advise their members, supporters and the public at large, to abide by the Laws in general and in this case, the Public Order Act, Chapter 396. (Please see attached copy of the Public Order Act).

“An invitation is also extended to members of the aforementioned organizations and the public to visit the office of the Commissioner of Police, if there is need for conversation and clarification on this matter.

“The police will be strictly and responsibly enforcing this act and other laws of St. Vincent and the Grenadines.”