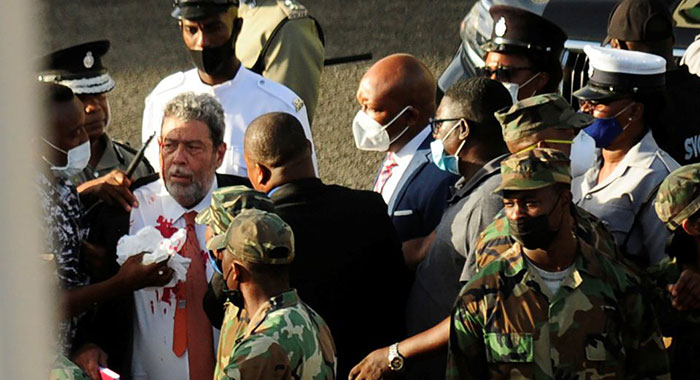 An opposition MP says that the police had identified a different lady as the assailant immediately after Prime Minister Ralph Gonsalves was struck in the head with an object during the protest in Kingstown last week Thursday.

Nigel “Nature” Stephenson, who is parliamentary representative for South Leeward, said he is prepared to give a statement, if required, about what he witnessed when another woman was taken into custody in connection with the assault.

Stephenson said he was on his way back to Parliament after the luncheon interval, when he saw two officers from the Rapid Response Unit, commonly called the Black Squad, “running down a lady”.

He said that he does not know the lady personally but has seen her at every protest that the New Democratic Party had organised.

“So, for some reason, that woman run straight into me. And I held her, I warded off the Black Squad policemen and I asked them, ‘Why is it that you are harassing this lady?’”

He said that the officers did not respond, but a ranking officer who was dressed in   fatigue, “he put his hand around me and said, very, very gently, and I respected that, ‘I do not want you to get involved in this one, Nature. This lady is wanted because she pelt an object and hit the Prime Minister.’”

Stephenson said that having received that information, he did not want to appear to be obstructing the police in doing their job.

“So I stepped away and left them,” he said.

The MP said that the following day, when he realised that somebody was in custody, in connection with the injury to the prime minister, he assumed that it was the same lady who the police had taken into custody in his presence.

“But I remember asking that officer before I released the lady into their custody, ‘How do you know that this lady pelt a stone’ — because he said a stone, the object was a stone. He said, ‘I wasn’t there but the officers told me that.’”

The lawmaker said that although he was in the protest crowd at the time, he did not know that the prime minister had been struck.

“So after he (the senior police officer) said that to me, I let the lady go.

“But fast forward, now to Friday (the following day), … lo and behold, it is a completely different person that they have in custody.

“So it goes to show that not even the police officers are certain about who throw the object. Because the ranked officer was in — he had no doubt in his mind that this is the lady that … throw that object, because his officers, who are close to the prime minister, told him that.

“But they had somebody else in custody. I will be prepared to give an official statement, if required, on behalf of the young lady who was arrested and charged. Because it is the confusion in determining precisely who did what,” Stephenson said.

On Monday, Annamay Lewis, 56, of Layou, pleaded not guilty to a charge that on Aug. 5, without lawful excuse, she wounded Gonsalves.

Lewis secured EC$3,000 bail and after exiting the Kingstown Magistrate’s Court, told reporters that she was innocent and that police had taken her out of her bed and forced her to give a statement.