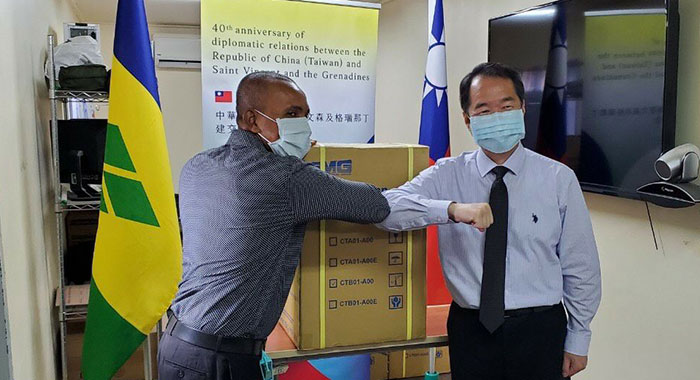 Taiwan Ambassador to St. Vincent and the Grenadines (SVG), Calvin Ho has presented 30 sets of oxygen concentrators to the government of SVG.

Ho made the donation of behalf of his government, and Cuthbert Knights, permanent secretary in the Ministry of Health, Wellness and Environment, received them on behalf of SVG on Aug. 10.

Ho said that donation from Taiwan followed previous donations of ventilators, medical masks, protective gowns and other medical supplies to SVG since the outbreak of COVID-19 in 2020.

In addition, the Taiwan Embassy has also made several donations of medical resources to other entities, such as the Bequia Hospital and the Nurses Association.

The ambassador said he was impressed with the resilience shown by Vincentians amidst the eruption of La Soufriere, adding that he believed the hardship would end someday and reaffirmed that Taiwan would stand firmly with SVG to address the global pandemic and natural disaster issues.

Ho also stressed his appreciation for the support of SVG for Taiwan in participating international organisations and events.

Meanwhile, Knights expressed his appreciation for the support from the Taiwan Embassy for continually providing critical equipment and medical supplies at the time of urgent needs.

This donation ceremony was part of the embassy’s series of events in celebration of the 40th anniversary of diplomatic ties between SVG and Taiwan.