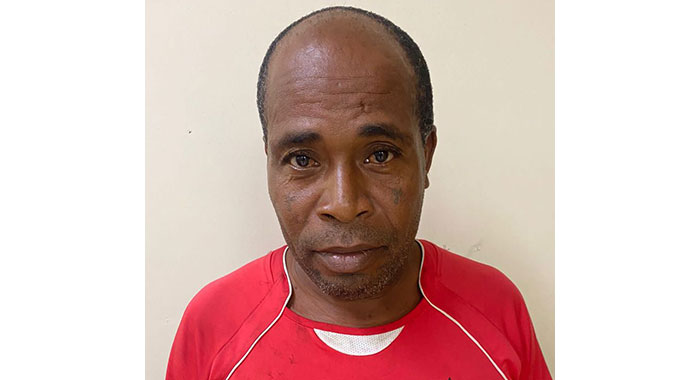 A Sally Spring man has been charged with murder in connection with the alleged love triangle killing in Diamond on Sunday.

Police have charged Delroy Quashie, a 46-year-old labourer, of Sally Spring, with murder in connection with the death of Shon Browne aka “Sean Paul”.

Browne, a 33-year-old bus conductor, of Diamond, died after being stabbed multiple times in the chest with a knife at Diamond.

Police said that, on Sunday, sometime after 5 p.m., Browne and Quashie allegedly got into an altercation, which resulted in Quashie being chopped on the left hand.

Quashie is alleged to have then stabbed Browne multiple times in the chest with a knife.

Browne died at the scene and is listed as the 27th homicide victim in St. Vincent and the Grenadines this year.

Reports are that the two men were involved in an altercation, after Browne allegedly met Quashie being intimate with a woman with whom Browne was reportedly also involved.

Quashie’s additional legal troubles come even as he is awaiting trial on 12 counts of sex crimes in connection with two girls who are related to each other.

In October, Quashie, whose address was then listed as Stubbs, pleaded not guilty, at the High Court, to each count of the indictment.

The girls were each under the age of 13 when Quashie allegedly raped each of them on three separate occasions at two locations.

The Crown also brought one count of an additional sex charge against Quashie in connection with each count of rape.