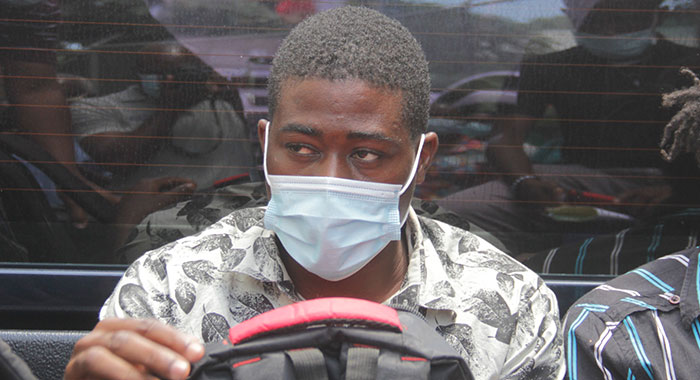 A former national athlete was, on Monday, jailed for two years and five months for possession of three firearms, including an assault rifle, stolen from the Georgetown Police Station in June.

Meshach Dublin, aka “Shane” and “3D”, 26, of Diamonds became the second former national athlete to be sentenced in connection with the firearms.

Just before the sentence was handed down, defence counsel, Jomo Thomas, told the court that it would be “a travesty almost begging for an appeal if the principal person in this enterprise gets a lower sentence”.

He was referring to Avi King, the man who burglarised the police station and stole the three firearms, as well as 305 rounds of ammunition.

On July 21, Chief Magistrate Rechanne Browne, sitting at the Serious Offences Court, sentenced King to two years and eight months in prison for his crimes.

Magistrate Bertie Pompey handed down the sentence on Dublin two weeks after Senior Magistrate Rickie Burnett jailed former national footballer Myron Samuel, a 28-year-old shopkeeper, of Layou, for 18 months for possession of a Glock 22 pistol stolen from the station.

Further, Samuel was given until Dec. 31 to pay a fine of EC$3,500 for possession of 15 rounds of .40 ammunition, or spend a further nine months in prison.

On Friday, at the Mesopotamia Magistrate’s Court Dublin pleaded guilty to three gun possession charges, seven fewer that he had initially pleaded guilty to when he was arraigned before the Serious Offences Court on June 21.

He pleaded guilty to charges:

·      that on June 17, at Diamonds, he had in his possession one M4 rifle, serial number W87775, a prohibited weapon without the authorization of the minister;

·      that between June 2 and 17, at Sion Hill, had in his possession one Glock 22 pistol, serial number LNL 155 without a licence issued under the Firearms Act; and

·      that on June 17, at Kingstown, he had in his possession, one Glock 22 pistol, serial numbered LNL 144 without a licence issued under the Firearms Act.

The court had heard Thomas’ submission as well as that of the prosecutor, Police Sergeant Renrick Cato, but had adjourned sentencing to Monday at the Georgetown Magistrate’s Court.

In handing down his sentence, Pompey said that he had put Dublin’s crime in the highest category, because an assault rifle was involved. He, therefore, established a starting point of four years and six months, or 65% of the maximum, with a range of three to five and a half years.

The magistrate said that mitigating features of the defendant was that he had no previous conviction, showed remorse for his action, was young, a promising athlete, he cooperated with the police, and had acted under intimidation.

Pompey then applied the full one-third discount for Dublin’s guilty plea, and reduced the sentence to take into account the month that the defendant spent on remand.

After the sentence was handed down, prosecutor Corporal Delando Charles told the court that the prosecution was withdrawing all the other charges against Dublin.

In presenting the facts, on Friday, Cato told the court that as a result of the explosive eruption of La Soufriere in April, officers from the Owia and Sandy Bay Police Stations evacuated to the Georgetown Station, taking their weaponry with them.

On June 2, the weapons were accounted for, but the following day, some of them were reported missing.

The Major Crime Unit launched an investigation, which led to King, a Diamond resident, who gave investigators certain information.

That information led to Dublin and the police went to Dublin’s house and he took them to the Diamond Cemetery and handed over the M4 rifle to them.

He also took the police to another home in the village where a quantity of ammunition was handed over to the police.

During the investigation, Dublin gave the police other information, which led to the recovery of the two pistols.

The court heard the testimony of firearms expert, Sergeant Julian Cain, who explained the functioning of the weapons and their maximum effective range.

In mitigation, Thomas said that when Dublin was detained, he was represented by another counsel and had pleaded guilty to all the charges against him, including the three to which he entered guilty pleas on Friday.

Thomas said that after he was retained, he examined the information presented to the previous counsel and told Dublin that that lawyer had given him good advice.

Thomas said he, however, negotiated with the prosecution and was able to get them to drop the lesser charges.

He said that Dublin cooperated fully with the police and expressed remorse for his actions.

Thomas noted that — King and Samuel — had already pleaded guilty and had been sentenced for their involvement, and noted the sentences handed down in those cases.

Thomas said that his client had not wasted judicial time, reverting to guilty pleas before the case got to trial-ready state.

He said that Dublin is a young offender in the prime of his life and would have a chance to think about the difficulties he had gotten himself into and what to do with the remainder of his life.

The lawyer said he had had a conversation with King, who told him that he had had “an overbearing influence” on Dublin in getting him to be in possession of the firearms.

Thomas examined the sentencing guidelines and presented case law and suggested that the court impose a sentence of no more than two years in prison.

Guns ‘as common as cold’ in SVG

After the defence counsel’s mitigation, the magistrate, Bertie Pompey retired to his chambers to consider his sentence.

When he returned to the bench, Director of Public Prosecution (DPP), Sejilla McDowall, who was in the court in relation to another matter, rose and said that the Office of the DPP encourages prosecutors to play an active role in the sentencing phase proceedings also.

The magistrate then invited the prosecutor to address the court on sentencing.

In his submission, Cato, examining the sentencing guidelines, noted that an M4 rifle was involved and there were three weapons altogether.

He said that the disappearance of the firearms from the police station “was a public alarm in the state of St. Vincent and the Grenadines”.

He also argued that the case should be placed in a higher category than the lawyer had reasoned.

The prosecutor asked the court to send a strong message to would-be offenders.

He said that he was present when King was sentenced and the mitigating factors of the case outweigh the aggravating factors.

Cato further noted that King had pleaded guilty at the first opportunity and maintained that guilty plea, and was sentenced to two years and eight months in prison.

After Cato’s submission, Thomas pointed out to the court that in the case of Randy Shallow and Freikesha Douglas, the Court of Appeal upheld a four-year sentence for a prohibited weapon.

On hearing the prosecution’s submission and the further comments from the defence, the magistrate said that while he was going to give his sentence that day but adjourned it to Monday (yesterday), at the Georgetown Magistrate’s Court.

Zackrie Latham, 25, a former police officer is awaiting trial on a number of offences in connection with the theft of the firearms and ammunition from the Georgetown Police Station.