Union to vote on whether to defy police 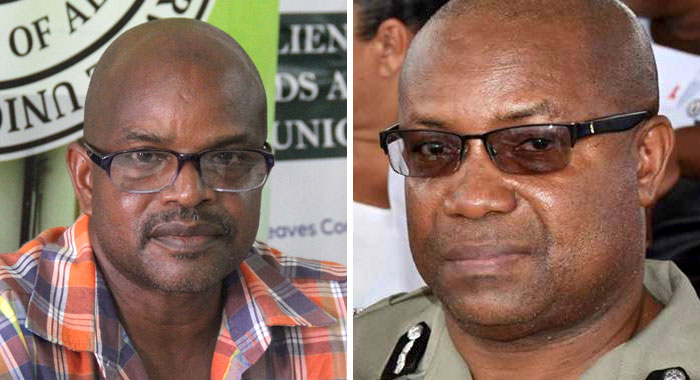 The Public Service Union (PSU) will vote, on Saturday, on whether to defy the police and have a march in Kingstown next week.

The response of the police to the union’s notice of demonstrations and a march in the capital were the subject of a meeting of members of the union Thursday night.

They were asked to vote on defying the order of the police and hold the procession in Kingstown, on Wednesday, or comply with the route outlined by the police and march from Arnos Vale to Sion Hill, even though they know that the police are “wrong”.

Boucher said that one-third of the people voted to have the procession in Kingstown.

He, however, said that when the vote was taken on whether to have the procession from Arnos Vale to Sion Hill, as the police had indicated, only 10 persons voted.

Boucher said that since it was past 10 p.m., it was suggested that the meeting reconvene on Saturday so that members could vote.

On Thursday, Boucher told iWitness News that the PSU has put into the hands of its lawyer, the response by Commissioner of Police Colin John prohibiting demonstrations outside Parliament next week.

John has also instructed the union to hold between Arnos Vale and Sion Hill a procession that it had planned for the capital.

“We raised the matter with the legal counsel who will, based on our instructions, draft a response to the commissioner,” Boucher said.

“We understand that the commissioner seems to be saying a meeting and a demonstration are the same thing. We don’t see how that could be the same thing,” Boucher said.

“In addition, too, the Trade Union Act gives us the legal authority to demonstrate but those are not given consideration by the commissioner. So we are very much disappointed with their response, of course.”

The union’s events in September are part of its efforts to get the government to rescind changes to the public health laws, passed into law on Aug. 5.

The changes mandate COVID-19 vaccines for certain categories of government workers, who could lose their job if they refuse to take the jab.

The amendments allow and give doctors specially selected by the state the final say on who would be granted an exemption on medical grounds, regardless of what people’s personal physicians say.

In two letters, dated Aug. 25 and 26, General Secretary of the PSU, Phillip Bailey wrote to John notifying him of the union’s intention to engage in a procession around Kingstown on Sept. 9 and to engage in a demonstration in front of the Kingstown Vegetable Market, Paul’s Avenue Road and White Chapel Road from Sept. 7 to 10.

In Aug. 31 letters in response, John citing the Public Order Act, said that the Kingstown Vegetable Market is within 200 yards from a point within the curtilage of the High Court and Parliament.

“As commissioner, I cannot usurp the authority that was granted to me by Parliament and authorise your Organisation or anyone to breech (sic) the law. Furthermore, the route you proposed is; if granted, would at some point contravene the specified distance, specified times section of the law.”

He said that having stated the authority given to the Commissioner of Police and the limitations placed on him by the said law, “I have given directions prescribing the route to be taken by the procession. The route that is prescribed is between Highway Trading, Arnos Vale and the Sion Hill Intersection on Thursday September 09, 2021 between 10:00 am and 4:00 pm. This is done in an effort to preserve good order and public safety.

The commissioner said that due to the provision of Section 7 and 10 of the Public Order Act, the public meeting at the Kingstown Vegetable Market, White Chapel Road and Paul’s Avenue Road on Sept. 7 to 10, 2021 is “prohibited”.

But Boucher said that the police chief is denying the union something that it did not request.

“We didn’t write and ask a request. We simply wrote and informed. I don’t see how you could deny someone something if they’re not requesting permission to. But, the legal people, of course, will deal with all of that,” Boucher said.

He added that the union would meet with its members Thursday night “and they will have to pronounce on what the commissioner has actually done and decide the course of action or lack thereof. Whichever way, they will make the decision on how we proceed.”

In his letters, John said that Section 7 of the Public Order Act, captioned “Power to preserve good order and public safety on occasion of procession”, among other things, authorises the Commissioner of Police to give directions imposing upon the persons organising or taking part in the procession, such conditions as appear to him necessary for the preservation of good order or public safety.

These conditions include prescribing the route to be taken by the procession and conditions prohibiting the procession from being held, or from continuing to be held or from entering any particular public place specified in the directions.

He noted that section 10 (3) speaks of specified distancing, meaning a radius of 200 yards from any point within the curtilage or any scheduled premises.

This section of the law also refers to specified time, which is defined as in the case of the High Court building, any time at which either the House of Assembly, the Court of Appeal, the High Court, or a magistrate’s court is sitting.

And, in the case of the head office of a ministry, at any time between 8:30 a.m. and 5:30 p.m., Section 10 of the Public Order Act also refers to scheduled premises, namely the High Court building, Bay Street, Kingstown — where sittings of the House of Assembly and the Courts are commonly held and where also the head of all ministries is located.

The commissioner said, “As a responsible organisation, it is my honest hope that you would encourage members to abide by the laws and not engage in an unlawful meeting and/or procession.”

One reply on “Union to vote on whether to defy police”