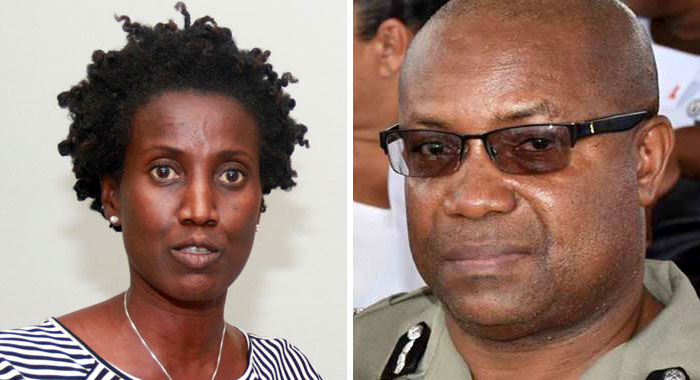 Lawyers for the Public Service Union — PSU — have told Commissioner of Police, Colin John that the Public Order Act does not apply to trade unions and, therefore, he cannot prohibit the union’s demonstrations in Kingstown next week.

“Taken together, your instructions and or orders as per the notification of the Public Service Union amounts to a misapplication of the Public Order Act and flies in the face of the constitutional protections accorded to citizens of our country,” counsel Shirlan “Zita” Barnwell of Jomo Thomas Chambers, told the police chief in a letter on Friday.

“Therefore, the legal, honourable and proper course of action is to rescind your prohibition and promise cooperation and protection to public workers willing to engage in peaceful protest in defence of their constitutionally protected rights,” Barnwell said in a letter on behalf of her clients.

In Aug. 31 letters, John — a lawyer and former prosecutor — cited the Public Order Act when he “prohibited” the union from having demonstrations in Kingstown next week.

In two letters, dated Aug. 25 and 26, General Secretary of the PSU, Phillip Bailey, wrote to John notifying him that the union planned to have a procession around Kingstown on Sept. 9 and to engage in a demonstration in front of the Kingstown Vegetable Market, Paul’s Avenue Road and White Chapel Road from Sept. 7 to 10.

In his responses, John, citing the Public Order Act, said that the Kingstown Vegetable Market is within 200 yards from a point within the curtilage of the High Court and Parliament.

The commissioner said that due to the provision of Section 7 and 10 of the Public Order Act, the public meeting at the Kingstown Vegetable Market, White Chapel Road and Paul’s Avenue Road on Sept. 7 to 10, 2021 is “prohibited”.

He further told the union that their procession should be held from Arnos Vale to Sion Hill, rather than in the capital, Kingstown.

The union forwarded the commissioner’s response to its legal representatives for review and response.

“The preamble of the Public Order Act explicitly speaks to the purpose of the Act: ‘an ACT to prohibit the wearing of uniforms in connection with political objects and the maintenance by private persons or associations of military or similar character: to make further provision for the preservation of public order on the occasion of public procession and meetings in public places’,” Barnwell told John in her letter on Friday.

She pointed out to the police chief that the PSU “is a Trade Union of workers.

“It is NOT a quasi-military organisation; it is NOT an association of military or similar character.  In short, the Public Order Act does not apply to Trade Unions. We remind you that the interests of Trade Unions are promoted and protected under section 11 of the Constitution, the supreme law of St. Vincent and the Grenadines, albeit a qualified right,” Barnwell said.

Section 10 of the Constitution addresses “Protection of freedom of assembly and association”.

The lawyer said that even if the Public Order Act was applicable to trade unions, Section 5 of the said act “specifically requires that any person organising or concerned in organising any public meeting or public procession shall NOTIFY the Commission of Police.

“The Act does not require any organisation to seek permission from the Commissioner of Police to have a meeting or public procession.  Parliament did not give powers to the Commissioner of Police to permit or prohibit peaceful protest under the Public Order Act.  The use of the word NOTIFY must be instructive as it relates to the intention of Parliament,” Barnwell said.

She said that the Act indeed gives the commissioner of police the power to preserve good order and public safety on the occasion of a procession.

Barnwell said “it is pellucid” that Section 10 of the act “speaks to meeting or procession in action.

“This section does not confer the power to the Commissioner of Police to prohibit a meeting. We are sure you have an appreciation for the fact that legislation is to be read in its entirety to fully understand the spirit and intention of parliament.

“The word ‘disperse’ does not mean to prohibit upon notification of ‘meeting’ or procession,” the lawyer said and referred the police chief to Section 10 of the Act, which she said reads on from section 12.

“Section 12 clearly indicates that it is an offence to fail or neglect to comply with a call to disperse. There is nothing unlawful in having a peaceful protest; the unlawful act is to fail to disperse if called upon to do so. And, we add that a call to disperse, certainly, is where the procession or ‘meeting’ becomes non-peaceful.

“The spirit of the Act most clearly does not give the Commissioner of Police the power without reasonable and proper cause to disperse a peaceful ‘meeting’.  The intention of parliament is to maintain or preserve good order and public safety where the environment is non-peaceful,” Barnwell said.

She said that the PSU rejects “the view or any insinuations that our members intend to hold anything but a peaceful protest.

“As Commissioner of Police, you must know that conjecture and baseless speculations are unacceptable in law.  Therefore, we are dismayed and view with disdain your insinuation that our Public Workers intend to engage in any activity, but peaceful protest, which will be done under the protection and security of the Police Force and St. Vincent and the Grenadines.”

She said the Constitution provides for the right to assembly, association and free speech.

“Therefore, the Commissioner of Police cannot arrogate authority to impose time, place and manner restrictions to an assemblage of the people on a presumption that they will be disorderly and disruptive. After all, over the last five months, our country recorded numerous pickets: protest demonstrations without any major breach of the peace. The occasional skirmishes that flared up cannot and must not be used as a pretext to prevent expressions that are constitutionally protected. Rather, it is the obligation of the State to single out perpetrators of non-peaceful protests to preserve good order, public safety and the rights and freedom of a democratic society.”

In a response, on Friday, addressed to counsel Jomo Thomas, of Jomo Thomas Chambers,  the police chief said:

“Please be informed that based on the action of different individuals or groups, we may be given the opportunity to test the matter in Court.”