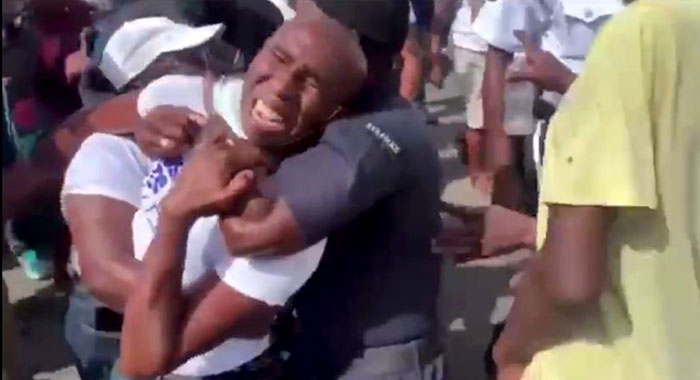 Carly John, husband of opposition senator, Shevorn John, was, on Monday, slapped with three charges over the incident in which a police officer placed him in a chokehold during the protest in Kingstown last Thursday.

Police have also charged Cherry-Ann Caine, who is alleged to have attempted to free John from the chokehold.

On Monday, lawyer Kay Bacchus-Baptiste told iWitness News that John, an Owia resident, was charged that last Thursday, in Kingstown, he resisted the arrest of Verrol Sam, he being a police officer acting in the due execution of his duty.

He was further charged that he assaulted Sam, he being a police officer acting in the due execution of his duty.

The third charge was that John assaulted Racquel Coombs, causing actual bodily harm, she being a police officer acting in the due execution of her duty.

Caine, a Georgetown resident, was charged with obstructing Sam, he being a police officer acting in the due execution of his duty.

Both John and Caine have been granted station bail and ordered to appear before the Kingstown Magistrate’s Court on Tuesday to answer the charges.

On Thursday, John was detained for about five hours before being released without charge and was ordered to report to police the following day.

Bacchus-Baptiste said, on Monday, that she, as well as Israel Bruce, an opposition senator and member of the legal team, will hold a press conference, on Tuesday, about the charges.

The arrest and charge of John and Caine bring to 10 the number of persons who have been charged in St. Vincent and the Grenadines in connection with protests since July.

Beside John and Caine, all the others were charged that they organised or took part in protests on July 29 and Aug. 5, without notifying the commissioner of police.

They have each pleaded not guilty to the various charges brought against them and are awaiting trial.