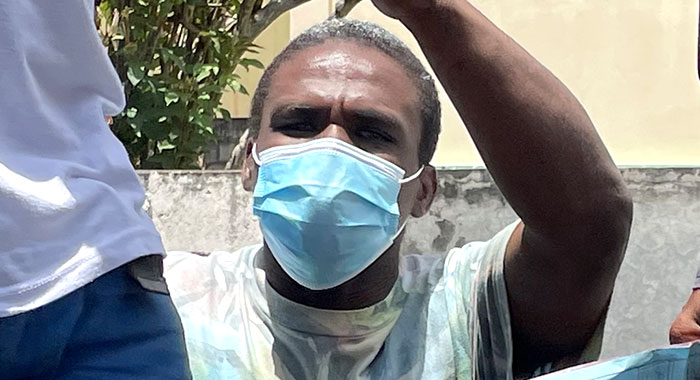 Renaltho Bute has been jailed for his spate of crimes. (iWN photo)

A New Montrose man, who committed 12 offences related to theft between December 2020 and July 2021, last Friday, begged Senior Magistrate Rickie Burnett not to “lost me in jail” — impose a long prison sentence.

“I am not sugarcoating anything for you, I am not being nice to you because you have not been nice to people,” Burnett told Renaltho Bute, after the defendant tried to justify one of his crimes.

Burnett went on to comment on the dates and manner of some of Bute’s crimes.

The magistrate likened one of the thefts as the story involving Mr. Spencer, an armed property owner, and Bulldog, an accomplished thief, who stole from Mr. Spencer a bunch of bananas during the time that Mr. Spencer had taken to look at his wrist watch — a story that is part of West Indian folklore.

Burnett further noted that Bute had fought the security guards at a store where he had stolen some items.

Bute suggested that the security guard had choked him.

“Mister man, you went in as a thief,” the magistrate replied.

Burnett further pointed out that Bute had stolen two bunches of fig from a Montrose woman.

“Like you own this country?” the magistrate said, adding that after the police arrested Bute, he broke two windows at the police headquarters.

Bute responded that the officers were fighting him, adding that the police would not say that is the case.

The magistrate noted some of the other villages in which Bute had committed his crimes, adding, “Then you come to court now and the court must be lenient on you.”

The magistrate reminded Bute of his most recent convictions, which included stealing a bull cutter from Layne’s Hardware on May 5, a crime for which he was jailed for three months.

However, soon after his release, on July 13, Bute stole a hammer from Gibson Building Supplies, for which he was jailed for six months.

Soon after his release he stole from Richardson Motors in Arnos Vale and then stole two packs of Cuba perfume from Jax Enterprises Ltd.

Bute went on to steal from St. Mary’s R.C. School, then stole from an elderly woman, surnamed Providence, who Bute said used to feed him.

“So that is your record, Mr. Bute,” Burnett said, telling the defendant that he is not a good candidate for rehabilitation.

“You are seasoned and you are settled,” he said, adding that based on the sentencing guidelines and the number of matters, the court would need some time to calculate the sentence.

On Monday, the magistrate jailed Bute for three years and four months, as some of the sentences will run concurrently.

He had pleaded guilty to the following charges:

That on Dec. 10, 2020, at Kingstown, he stole one sack of fertiliser, valued at EC$64, the property of Abraham Cain of Richland Park.

That on Dec. 15, at Bay Street, Kingstown, stole two bales of toilet paper, valued at EC$228, the property of George Isaacs of Ottley Hall.

That on Dec. 16, at Stoney Ground, he stole two tins of Robert Chicken Salami, valued at EC$46.20, the property of Massy Stores Ltd., Stoney Ground.

That on Dec. 17, 2020, at Stoney Ground, stole two bottles of Seven Seas Cod Liver Oil, valued at EC$84.14, the property of Massey Stores Ltd., Stoney Ground. He was jailed for one month.

Bute bit Moore on the left forearm, and scratched Floissac on his right hand with his fingernails as the two loss prevention officers tried to prevent him from leaving the store in connection with some items he had stolen the previous day.

That on March 30, at New Montrose, he stole two bunches of figs, valued at EC$50, the property of Ebika Kagbala, of New Montrose.

That on April 6, at Kingstown, without lawful excuse, damaged two glass panes, valued at EC$37.28, the property of the government of St. Vincent and the Grenadines, intending to damage such property. Reprimanded and discharged.

The glass panes broke into pieces when Bute head-butted and boxed them as he held onto a window ledge in the corridor of the Criminal Investigation Department in Kingstown, after police arrested him in connection with a theft report.

That between July 3 and 4, at Arnos Vale, stole a quantity of tools, valued at EC$4,463, the property of D&J Investments Ltd. The stolen items, which included three buffer machines, an impact drill and charger, were recovered.