Seizure of drums during protest ‘a blight’ on gov’t 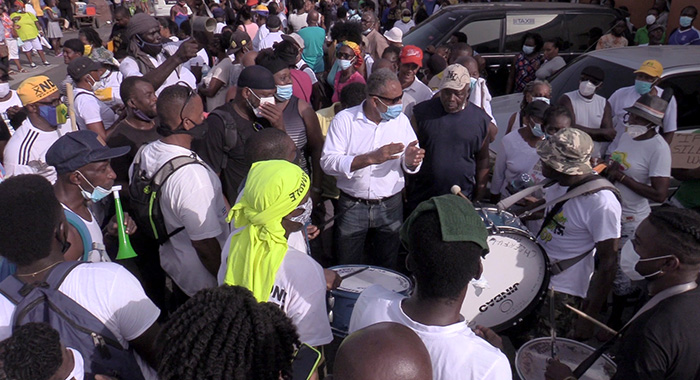 Opposition Leader Godwin Friday, centre, among drummers and other protesters after the drums were returned. (iWN photo)

The confiscation of drums during the protest in Kingstown last week Thursday, Sept. 9, has been likened to the colonialist clamp down on the Spiritual Baptist faith in St. Vincent and the Grenadines from around 1912 to 1950.

“This thing about taking away drums from people who are protesting, you know what I likened that to? When the colonialists tried hard to stop the Spiritual Baptists from their religious practices,” Daniel Cummings, chairman of the opposition New Democratic Party (NDP) said on his party’s programme on NICE radio on Tuesday.

Cummings, who is also MP for West Kingstown, was among members of his party, including its president, Opposition Leader Godwin Friday, and vice-president and Central Kingstown MP St. Clair Leacock to use their radio shows this week to condemn the action of the police during the protest.

Cummings, who is also MP for West Kingstown, said that the government has “gone beyond what the colonialists have done by taking away the drums from the people in the streets”.

Spiritual Baptists, previously known as Shakers, is a branch of Christianity that incorporates a number of elements of black Africanism, including drumming in their worship.

George McIntosh, who has been proposed as a National Hero candidate in SVG, made his presence felt in the struggle to remove the ban on Shakerism that was imposed in 1912.

Historian Adrian Fraser, writing in 2013, said: “He stated that it was un-British and was imposed on the oppressed working class people largely because they were poor and undefended. He argued that the ban deprived a section of the community of the right to serve God in the manner they wanted to.”

During last week’s protest, organised by the NDP to highlight national issues, chiefly its opposition to mandatory COVID-19 vaccination, police took away the drums, saying that they constituted amplified sound and also contravened the Noise Act.

The drums were later returned, and a man who was arrested, released, after Godwin Friday, St. Clair Leacock, and lawyer Kay Bacchus-Baptiste, a former NDP senator, met with Commissioner of Police, Colin John.

Cummings noted that the development took place under the Ralph Gonsalves administration, which had taken Rastafarians to Ethiopia some years ago.

“And now, look, taking away drums from the people in the streets of Kingstown…”

Cummings said the confiscation of the drums was “a national disgrace” and a “blight” on the government.

Meanwhile, the opposition leader also spoke to the issue on his appearance on his weekly radio programme on Monday.

“I mean, how do you interpret the fact that the police were seizing, seeking to stop people from playing drums,” he said, adding that drums are played in funeral processions in Kingstown or any part of the country, at sports matches, village limes, and were also played during the previous protest that his party organised in the capital.

“How do you interpret that — that the police were now giving the impression that these drums are somehow dangerous in the hands of the protesters?”

The opposition leader said that the police also objected to the use of bullhorns during the protest.

“I mean, how can you contend that bullhorns are somehow a problem in a protest when you need to be able to communicate with people? How would I speak to a crowd of that size without having a bullhorn?” he said.

Friday said that during the meeting with the police chief, Leacock pointed out that it was a previous commissioner who had introduced the use of bullhorns during protests.

“How could you stop people from exercising their right to protest and to make that effective?” the opposition leader said.

He said that during the meeting with the police chief, “we impressed upon him these important points and the need for people to express themselves democratically.

“And you can see that when the drums started playing again, when the bullhorn could be used freely, they were used in a beautiful expression to promote our democracy,” the opposition leader said.

And, on his programme, on Wednesday, Leacock said:

“The demonstration was proceeding peacefully. Not too large numbers but peacefully and then suddenly you had this obstruction when the police are complaining, you can’t use the bullhorn and they are trying to stop the use of it. And then the next thing you can’t beat the drums.”

Leacock said that this was “so conflicting, confusing, inconsistent” with what the NDP had discussed, before the protest, with the police chief.

He said that they had agreed to the extent that Parliament and the High Court would be in session, that there would be no amplified music closer than the Ministry of Transport and Works, Music Centre.

“We had that — that we can get amplified music. That’s what we agreed. And you stopped that. And you took all the drums.”

Neither Parliament nor the High Court were in session during the protest last week.

And, speaking at a press conference at Bacchus-Baptiste’s chambers, on Tuesday, Israel Bruce, a lawyer and NDP senator, said that some people in SVG are being targeted “because as far as I am concerned, the government of St. Vincent and Grenadines that came to office on the backs of the poor and ordinary people in this country, joining the political organisation in protest, now saying now, that we are in government, we really don’t fathom all these protests”.

Bruce said that the government has no objection to protests when only a few persons attend, because they could turn around and derive the attendance.

“But when you see people really showing their disgust, you start to use the police force to drive fear into the heart, mind and soul of the people of this country,” said Bruce, who, along with Bacchus-Baptiste, is representing a number of persons charged in connection with organising or participating in protests in Kingstown over the past few months.

“Now, if that was not bad enough, it got worse. So on Aug. 5, I watched in amazement, as police arrested a black man in St. Vincent and the Grenadines for beating a drum on the streets of Kingstown. I don’t know that it can get worse than that. That makes us a laughing stock of the region.

“But mind you, within an hour, hour and a half, that same person was arrested, drum was returned. And he was released from his arrest. Is that arrest legal? Is it arbitrary? Have they detained the drummer arbitrarily? Yes, they have,” Bruce said.