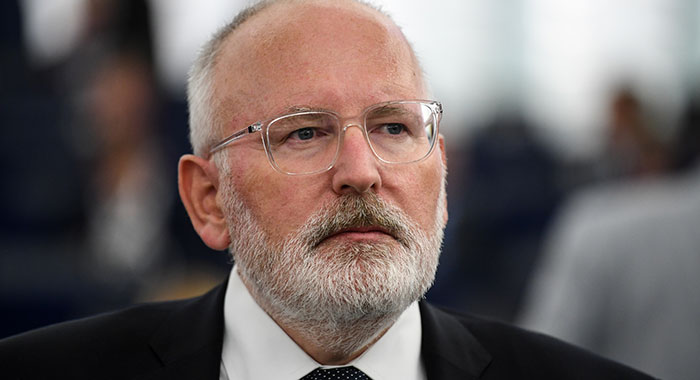 KINGSTOWN, St. Vincent (CMC) — The Executive Vice-President of the European Commission, Frans Timmermans, says he remains optimistic that there could still be “a good result” emanating from the 26th United Nations Climate Change Conference (COP 26) that gets underway at the Scottish Event Campus (SEC) in Glasgow next month.

The Oct. 31 to Nov. 12 event will bring parties together to accelerate action towards the goals of the Paris Agreement and the UN Framework Convention on Climate Change. It will also be the first time the countries can discuss their progress since the Paris Agreement was signed in December 2015, then set ambitious plans, accordingly.

But the Caribbean and other small island development states (SIDS) have been pushing to contain global temperature rise to 1.5 degrees Celsius, above pre-industrial levels.

“Well, we still have a good shot at having a good result, … a lot still needs to be done between now and Glasgow, we have to have a breakthrough on climate finance, which is certainly important for the states in the Caribbean, we have to have more commitments in terms of national determined contributions, especially major emitters will need to look very seriously at their contribution,” Timmermans told the Caribbean Media Corporation (CMC) in an exclusive interview.

“We need to solve a number of so called rulebook issues about the rules of the game. If we can before Glasgow get some more indication, on the climate finance European Union is now pledged above what we’ve already done four billion euros extra, which makes it by far the biggest contributor to the issue.

“We now hope that others will follow suit, especially the United States. We call upon the major emitters to make more ambitious plans, especially China and India and others. If we can do that, that will also be helpful. So I’m still hopeful that we can come out of Glasgow saying we still have a shot at reaching 1.5 and staying well below two degrees. But I have to admit it’s going to be a rough ride, because we’re not there yet,” he told CMC.

Timmermans said he was also hopeful that countries that make pledges at conferences such as the COP 26 would live up to their expectations, adding “I think there is a heightened sense of urgency”.

Earlier this week, British Prime Minister Boris Johnson called for wealthy countries to meet a pledge to spend US$100 billion a year to tackle climate change as he prepares to host COP 26.

Timmermans said he believes that recent Intergovernmental Panel on Climate Change (IPCC) report providing the most up-to-date physical understanding of the climate system and climate change as well as bringing together the latest advances in climate science, has “left everyone in shock, because of the seriousness of the crisis, which is not developing in a linear way, but which is developing in an exponential way.

“So I believe that there is no one that can deny, you will meet climate crisis, and everybody sees what’s happening, erratic weather is no longer just something that happens in the Caribbean, it happens everywhere, we had a tornado and in the Czech Republic and in Europe, which was not something that we had seen before.

“We had huge floods in Germany and Belgium and the Netherlands. So the world is now well aware of the seriousness of the matter. And I think that will make it easier for participating states to put more money on the table. And I hope that we will also hear a pledge from (US) President Biden, very soon.”

Timmermans, who arrived in Antigua and Barbuda for talks with Prime Minister Gaston Browne, the current chairman of CARICOM and the chair of the Alliance for Small Islands States (AOSIS) at the United Nations Framework Convention on Climate Change (UNFCCC), said that the region can look forward to EU assistance in achieving their climate change goals.

“Well, unequivocally, yes, without any reserve. We share a lot of history. We share many values. We share common responsibility where Europe has also huge responsibility for where many countries in the Caribbean are today and we fully understand that. And we want to be trustworthy partners in this development,” he told CMC.

“I hope you appreciate that although the countries in this region might be small, they can punch above their weight, because they have the moral authority of countries directly affected already, by the climate crisis. That gives them a very strong voice, a very convincing voice. And that puts them in the position that they can claim solidarity in tackling this issue, which is an issue, either we face it together as humanity or we just lose.

The European Commission Executive Vice-President said that he held “very good and frank talks” with Prime Minister Browne, adding “you know, he has an almost Dutch attitude to conversations, very direct, putting the problems on the table, also, not shying away from criticizing the European Union or putting demands in front of the European Union.

“I like that. I like that way of being very clear and direct. I myself try and be like that as well. He was clearly not just advocating for his own country, he was clearly also presenting the position of other countries in the region.

“So in that sense, he gave me an opportunity to listen to him and listen to the wider problems in the region. I also had the opportunity to talk to the Prime Minister of Barbados, who gave me more or less same challenges and the same worries they have and the same request to have from the European Union.”

Timmermans told CMC he would, therefore, be leaving the Caribbean “with a much better understanding of where they stand and what they expect from us.

“And hopefully I will be able to give them a platform not just in Glasgow but also beyond to make sure that we fully understand how we are interlinked and how the European Union and this region can work together to give hope to our populations to show that we are able to overcome this climate crisis,” he added.