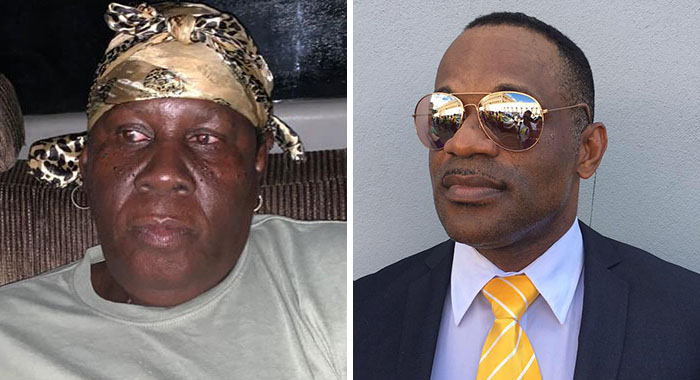 Chief detective Superintendent of Police Clauston Francis has denied the allegation by Annamay Lewis, 56, who, last week, saw the charge that she wounded Prime Minister Ralph Gonsalves on Aug. 5 withdrawn.

“She tells lies from the top of her mouth to the bottom of her mouth,” Francis told iWitness News when asked about Lewis’ claim that he went into her bedroom as she was putting on her underwear when police went to her house, in Layou, on the night of Aug. 5 to arrest her.

“When we got to her house, her front door was locked. And I knocked and we said ‘Police!’ And then I asked the officer, Corporal Andrews, to deal with her because I know they are both females.”

While Lewis has been freed of the charge that she wounded Gonsalves — who was struck in the head as he walked among protesters in Kingstown — she will be tried, on Jan. 4, 2022, on a charge that on Aug. 5, in Kingstown, she threw missiles to the danger of persons present.

Francis, who is the head of the Criminal Investigation Department and the lead investigator in the matter, told iWitness News that he does not want to comment on the matter because it is before the court.

“Well, all of that might come out in court. You don’t really know what might happen. But the matter surrounding her is in court but what she is saying about me, I was there when she was putting on her underwear; that is so far from the truth.

“It’s the same way she said she never pelt any stone at the prime minister and she’s innocent and all kinds of things. And then at the end of the day, the video shows what she did. So Annamay is known to be lying, maybe from since she was born,” he said.

Speaking at a New Democratic Party (NDP) press conference on Friday, two days after the wounding charge was dropped, Lewis praised her lawyers, Kay Bacchus-Baptiste, a former NDP senator, and Israel Bruce, an NDP senator, for their representation.

She said that on Aug. 5, she went to Kingstown to buy provisions for the stall that she operates in Layou.

Lewis said that she left the produce with someone and joined the protest around 1 p.m.

She said that she had left home with a rag and a little purse in which she put her phone.

“When I get to where the mic was set up, there were some people there with water. And I asked for a bottle of water. So I had a bottle of water in my hand and the rag. Later, then I leave and went to my home. When I reach home, I take a shower. And then I went to my bed.

Lewis said that Francis told her that she had injured the prime minister and that he was in the hospital and that she would have to apologise to the head of government.

“I then left my home; came out in the vehicle. From there, they drive me into hospital where they park me up there long time. And he said to me, he is going by the prime minister and come back. … he stay so long because I was there for a long, long time.

Gonsalves was flown to Barbados the same night of the incident for medical attention.

Lewis said that after they left the hospital, the police took her to CID.

“[He] didn’t even ask me if I want a lawyer, if I have a lawyer.  And then the third — because is three times he write so I had sign three times on  that paper and then after that he asked me to hold on outside.”

Lewis said that the following day, Francis told her that she was charged.

“Later on, they took me to Questelles Police Station where they have me the Friday night, the Saturday and the Sunday and then took me to court the Monday morning. And then I plead not guilty. And then I had to get somebody to bail me. When I reach home, all my produce that I was selling spoil. Everything spoil,” she said.