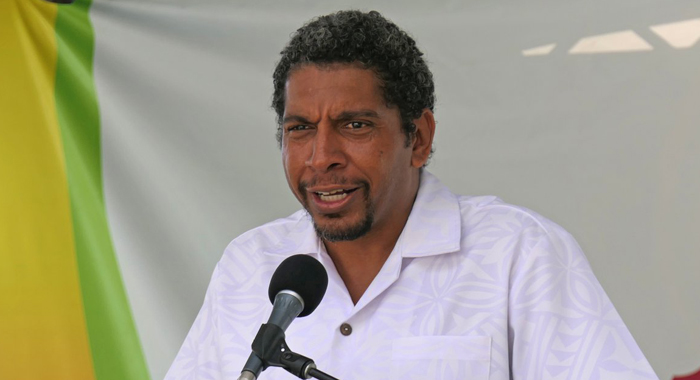 A government minister who saw two deaths among a number of COVID-19 cases in his constituency recently says that demonising vaccine hesitant people makes no sense.

Minister of Finance, Camillo Gonsalves made the point as he spoke about an outreach effort in Choppins, an East St. George community that saw some 80 people taking the jab over a two days period.

The minister asked health officials to host the vaccination and testing campaign in Choppins after the first of two people in the community died among the latest wave of COVID-19 cases, which has seen five deaths since Sept. 9.

“I think we can pattern future outreaches off of that,” the minister said on WE FM.

He said that very early in the national vaccination campaign, which was launched in March, the government had talked about “going house to house but not with politicians because we were afraid at the time of politicising the vaccine.

“We thought that if a ULP politician or an NDP politician came bringing a particular message, it would politicise the effort in a way that we didn’t want to do,” he said, referring to the ruling and opposition parties.

“We wanted this to be a nonpartisan outreach. We don’t think that this is a political matter one way or the other. And since then, certainly members of the government have been less reticent about going out into the community to ask people to get vaccinated, which is why I was in Choppins going around and asking people to take the vaccine.”

St. Vincent and the Grenadines, like much of the Caribbean, is battling vaccine hesitancy, with the number of Vincentians vaccinated among the lowest in the region.

The government’s policy of mandatory vaccination for certain frontline workers has resulted in protests in Kingstown, including one on Aug. 5, during which Prime Minister Ralph Gonsalves was struck in the head and injured.

The finance minister said that MP for South Central Windward, Saboto Caesar, has been doing something similar to what he had done in Choppins.

“We are open to all efforts, all efforts to increase vaccination. But we do not want the vaccine to be politicised and we don’t want the situation that we currently have, with the opposition, where the leader of the opposition and other members have been speaking out of both sides of their mouth on the COVID issue. We think that we should have one voice on this, and we should be united.”

He said that more and different outreaches are needed, adding that as it relates to vaccine ambassadors, his colleagues in the region have seen different results.

“Some say they’re working well, some say they haven’t made a difference. But we certainly have to be out on the ground more,” the minister said.

He said that during the outreach in Choppins on Friday, a lot of time was spent dispelling myths about the vaccine.

“… people talking still about how if you take the vaccine, you attract metal, you become magnetic, or that you have loss of sexual function, or that you can’t have children or you get brain damage.

“There’s a lot of misinformation still out there that we have to counteract. And also, people also want to see examples of members of their community taking the vaccine and walking around and being healthy, still nothing wrong with them,” he said.

Gonsalves, however, said that there are people who took the vaccine on Wednesday and brought others to get the jab on Friday, having seen that nothing had happened to those who had taken it on the first day.

“So there’s certainly some community work. There’s space for additional community work that has to be done. And I don’t think it makes sense for us to demonise people who are hesitant,” the finance minister said.

“Certainly, there are people who are manipulating misinformation and hesitancy and those people have to be called out for what they’re doing. But the people on the underground who are trying to process all of this competing information have hesitancy and have second thoughts.  I think what we have to do is talk to those people as much as we can.”

He said that the government has “other levers to try to encourage people to get vaccinated.

“Because if we don’t, the economy of this country, forget the health, the health is on a precipice at the moment. And I think you should talk to the chief medical officer and the minister of health about the severity of this precipice if we have to face what Grenada, … [or] St. Lucia, … [or] Barbados, …  [or] Jamaica is facing.

“St. Vincent and Grenadines will be in serious trouble if infections reach those levels but economically, beyond the next few months, we’re going to have to make some very, very difficult choices that will affect every single Vincentian if we don’t get the economy moving again.  And the only way to get it moving, again, is to get past COVID.  There are some people who feel they don’t rely on the state for an income.”

The finance minister said that people who think they are comfortable financially and can “make these sorts of idle pronouncements, no solutions, but idle pronouncements about individual choice and misinformation about medication and so on” should re-examine their position.

“…  Even they will feel the impact when the average man feels the pinch as well. All of us are part of this economy together. And the only way, the only way that we can see a sustainable future in St. Vincent and the Grenadines economically is if we get past these low vaccination numbers. And that we have enough people vaccinated in the country so that whenever a spike comes, it will be a short and low spike, and we get back to normal as quickly as possible,” he said.