‘Policy decisions will have to be made in the very near future about what has to be sacrificed to keep the government’s fiscal situation in order.’ — Finance Minister 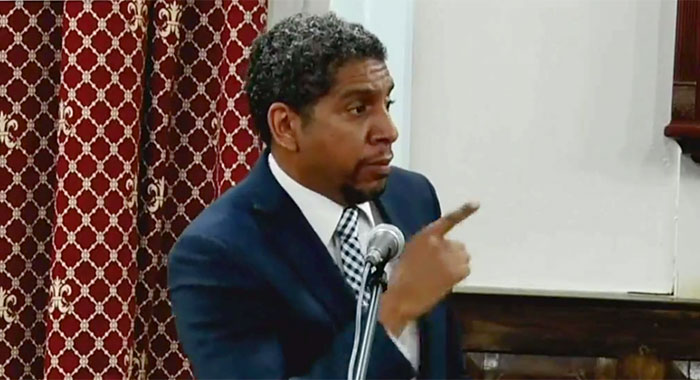 The public comments by some  prime ministers across the region about repayment of national debts have spooked investors, making it more difficult for other regional capitals to borrow money.

And this is proving to be a challenge to Kingstown in its efforts to borrow at the levels approved by Parliament and puts a challenge on paying salaries, and executing capital projects, says Minister of Finance, Camillo Gonsalves.

Gonsalves, speaking on WE FM recently, noted that Parliament has authorised his government to borrow EC$150 million on the local exchange market this year.

“We haven’t raised anywhere close to that. And the reason is that in other countries there are — two prime ministers have made statements, public statements, that they’re looking at restructuring debt or they don’t know whether or not they’ll be able to pay their debt in the near future.

“And that, quite naturally, has spooked some investors on the regional securities market, because if they hear that they bought bonds from country X or country Y, and that country is now thinking about not paying them or paying a reduced amount, people will be less likely and less willing to invest in future bonds. So the bond market in the region has stagnated a bit this year because of those utterances and because of general hesitancy about COVID,” Gonsalves said.

He said that the fact that Kingstown has not raised as much money as it expected on the securities market this year “puts a challenge not only on paying salaries, but puts a challenge, more importantly, on the things that we plan to build and do — our capital projects — throughout the year.”

The finance minister said that his government is still capable of servicing its debts and still intends to fully honour its debts.

“…  we don’t have the types of challenges that other countries had — that were borrowing a lot of money, a lot of short term money, at high interest rates that they have to pay back.

“Our debts are more low-interest and long-term and we’ve been very prudent in our borrowing in that regard. However, we cannot continue running the types of deficits that we are running.

“Policy decisions will have to be made in the very near future about what has to be sacrificed to keep the government’s fiscal situation in order. Before we get to public servant salaries, you may have to cut back on some of the assistance, the tremendous assistance, that we’re giving to people who have been affected by COVID, income support to people affected by the volcano, the type of supports that we have been giving to farmers and fisherfolk, those sorts of things will have to be reined in.”

The minister said that thereafter, the type of  investment that the government is making, in construction and in capital ventures will have to be curtailed.

“It’s getting more and more difficult to borrow because the local market is spooked and because investors generally, lenders generally are a little more cautious in this COVID time. I don’t think people’s salaries are in immediate danger but, certainly, within another month or two, we’re gonna have to make some very difficult decisions about how our dwindling resources are allocated.”

He said that government programmes such as Support for Education and Training (SET)  “have to be watched”.

“We are just about to enter a new cycle of the SET programme. We had an inflated number of young people on the SET programme over the last year and a half because of the volcano,” the minister said, adding that while each cohort not he programme is kept for one year, the last group of intern was not terminated on time because of April’s eruption of La Soufriere.

“In fact, we took on more people as a form of support and to help young people get jobs when the private sector was obviously not hiring. But now we’re at a new cycle of SET. And we’re going to have to decide how many people we can take on. And it is going to be a situation one, where we’re going to have to look at what we can afford,” Gonsalves said.

The finance minister said that another issue is assigning SET workers, in light of the government’s COVID-19 vaccination policy, noting that some are employed as nurses and teachers.

“… [we] will have to ascertain their own vaccine status to see whether or not we can take on SET workers who are unvaccinated and then put them on the front line, which would be contrary to the government policy.

“So all programmes will have to be reviewed. None of them are under the axes today as we speak. But the main thing we can do to  keep things afloat, is to improve our rate of vaccination so that we can open up the economy more,” Gonsalves said.