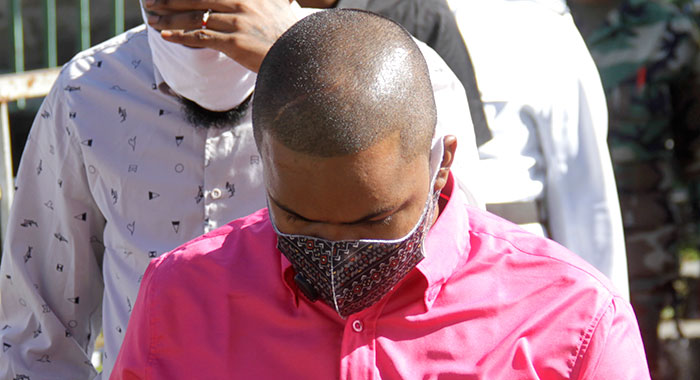 Accused murderer Juranie Baptiste on his way to court on Tuesday. (iWN pohoto)

Jurani Baptiste, who is charged with murder in connection with the 2016 death of a retired nurse in a night when three other people were killed, is to undergo another psychiatric evaluation ahead of his trial.

On Tuesday at the High Court in Kingstown, Justice Brian Cottle made an order for an updated psychiatric report on the 23-year-old former teen star cricketer.

Counsel Shirlan “Zita” Barnwell, holding papers for Baptiste’s lawyer, Kay Bacchus-Baptiste, said that the advocate has requested an updated psychiatric report, one having been done since October 2020.

Baptiste, who has a history of mental health issues, is charged with the murder of retired nurse Pamela Williams of Kingstown Park, one of four persons he is suspected of killing between Nov. 13 and 14, 2016.

An intruder bludgeoned Williams to death in her house on the night of Nov. 13, 2016.

Police have said that Baptiste is also the sole suspect in the killing of 35-year old Nicholas Layne of Edinboro who was killed in Campden Park, and of 47-year old Ronald Israel and his 75-year-old mother, Avis Israel, who were killed in their Old Montrose home. The killings occurred between Nov. 13 and 14, 2016.

Police, however, have not brought any charges against him in relation to those deaths.

Baptiste remains on remand in prison, pending the outcome of his matters.