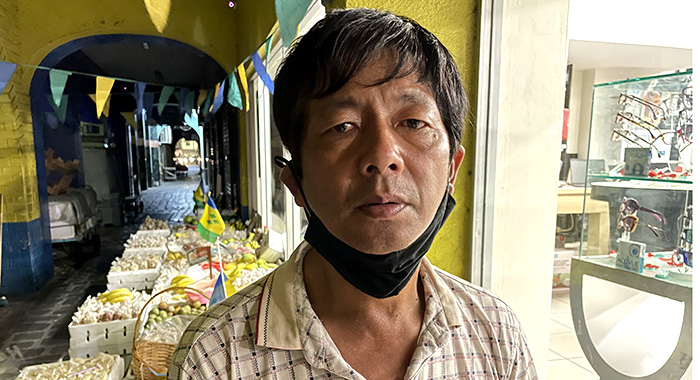 Chinese national Yu Lai-bao has been living on the streets of Kingstown since June. (iNW photo)

A Chinese man whose cousin took away their passports after bringing him, his wife and son to St. Vincent two years ago, was beaten in June and thrown out of the house and has been living on the streets of Kingstown since then.

Yu Lai-bao, 54, who does not speak any English, has been surviving off the kindness of businessman Maxwell Sayers, who operates a 24-hour fruit stall on Bay Street, Kingstown.

Speaking in Mandarin Chinese, Yu told iWitness News on Thursday night that he arrived in St. Vincent and the Grenadines on Nov. 18, 2019, on a Chinese passport, at the invitation of his paternal cousin, who operates three businesses in Kingstown.

Yu’s wife and son are also in St. Vincent and live at Indian Bay with the same cousin, their boss, who also confiscated their travel and other documents.

He told iWitness News that he is the person being beaten in a viral video circulated via WhatsApp on June 18.

Yu said that his boss asked him to run an errand but he was unwilling to do so and an argument ensued. The argument escalated to the point that Yu’s boss, wife and son beat him.

“They told me to leave or they will have the police come and arrest me. I told them, ‘You brought me here to help you work. Now, you beat me and throw me out and are telling me to find somewhere to live and food to eat.”

He told iWitness News that his boss had promised the Vincentian Immigration Department that he would take care of his lodging and food while in St. Vincent.

“I have been sleeping here since June 18. The police know that I sleep here. This is difficult. In China, I was living a good life. Now, I am sleeping on the street, eating bread every day,” said Yu, who told iWitness News that he and his cousin are also neighbours in China.

He told iWitness News that a Vincentian who speaks Mandarin had accompanied him to police headquarters and immigration department.

Further, iWitness News was reliably informed that after the video of the beating emerged on June 18, someone called it to the attention of senior police officers, telling them that that it could be a case of human trafficking.

Yu said that he has visited on several occasions, the Financial Complex — the building in which the Ministry of Foreign Affairs and Prime Minister’s Office are located — in an effort to have his situation addressed.

He further told iWitness News that he has visited the Taiwan embassy, which was unable to help him because he is not a Taiwan national.

Yu said that the Immigration Department has said that his cousin has indicated that he would purchase a ticket for him to leave on Nov. 15.

Yu, who showed iWitness News photos of the injuries he said he suffered in the beating, said that after his cousin threw him out, his cousin said that the police would arrest him if he went to the hospital for medical attention.

He said that sometime after the incident, the police took him into custody, and his son came and took him to the hospital for medical attention.

The police released Yu after two days, he said.

Yu said that his wife and son are willing to help him but are unable to do so because of the situation in which they live in St. Vincent.

Meanwhile, Sayers told iWitness News that when Yu came by on June 18, he allowed him to sleep in his van.

“I thought it was something short. I never knew it would have prolonged to this moment.”

Sayers said that when Yu came, he was pointed to an injury to his head.

“It’s a sad situation. Everyone who passes, it’s obvious that everyone is seeing and talking about it. “

Sayers said that a Vincentian who studied in Taiwan had visited Yu and took him to the police station and Taiwan embassy.

“I asked him what the conversation was about and he typed it on his phone saying it was about his flight — his flight being delayed. He said it was supposed to be aroundthe 7th of November but it was delayed. An immigration officer said they were trying to get a connecting flight but that is the issue.”

“During the day, he would go over the road and walk out and eat. Once he is here, I will make sure to give him $10 every morning. I give him that to get breakfast,” Sayers said.