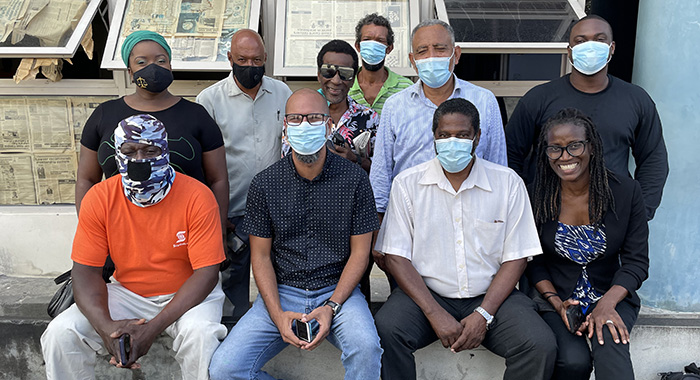 Director of Public Prosecution Sejilla Mc Dowall has entered nolle prosequi in the charges against each of the eight people accused of illegally organising and taking part in protests in Kingstown earlier this year.

Legal information Institute says that nolle prosequi is a Latin phrase, which directly translates to “not to wish to prosecute.”

Nolle prosequi is a legal notice or entry of record that the prosecutor or plaintiff has decided to abandon the prosecution or lawsuit.

With the DPP’s decision on Monday, Collin Graham, of Glen; Tyrone James, of Arnos Vale;  Adriana King, of Belmont; Robert King, of Rose Place; Kenson King, of Park Hill; Joseph Da Silva, of Mesopotamia; John Mofford, of Dorsetshire Hill; and, Rohan Simmons, of Diamond, will no longer have to answer to two counts of being concerned in organising a public procession without notifying the Commissioner of Police at least 24 hours before the procession and two counts of  knowingly take part in a public procession/meeting in contravention of Section 5(2) of the Public Order Act.

The DPP made the decision pursuant to section 67(1) of the Criminal Procedure Code, which gives her the powers to take over and discontinue any criminal matter in the country.

Graham and James’ matters were down for hearing on Tuesday.

On Nov. 26, lead defence counsel Kay Bacchus-Baptiste objected to an application by Crown Counsel Renne Simmons that the accused be tried together.

Simmons argued before Senior Magistrate Rickie Burnett at the Kingstown Magistrate’s Court that a joint trial would save judicial time.

However, Bacchus-Baptiste opposed the application, saying that a joint trial feeds the prosecution’s narrative.

But Simmons reasoned that the witnesses for the Crown were the same and there was some nexus between all the matters.

However, Bacchus-Baptiste maintained her objection, saying that the prosecution was in contempt of court, having not obeyed the order to disclose the evidence against each of the defendants by the dates that the court had ordered.

After hearing the arguments, Burnett ruled that each trial date should remain unchanged.

He noted that the defendants were charged separately, were arraigned on different dates, and were each given different trial dates and different directions for disclosure.

He further noted the section of the law under which the crown’s application had been made and the fact that there was no agreement between the defence and the Crown regarding a joint trial.

One reply on “DPP drops charges against 8 protest accused”