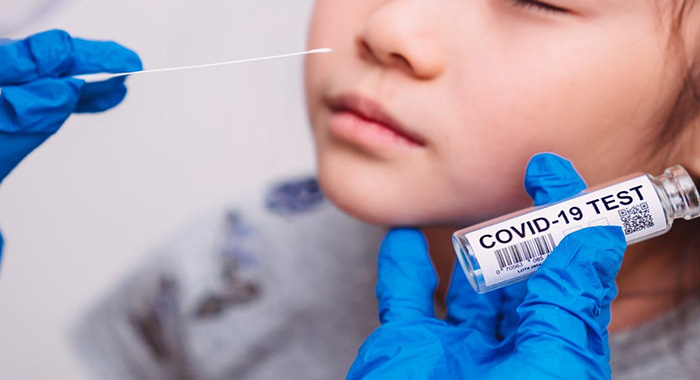 A child being swabbed for COVID-19 testing. (Getty images)

The Thusia Seventh day Adventist Church says it is not opposed to COVID-19 testing, contrary to what Prime Minister Ralph Gonsalves has repeatedly said he was advised.

The church, rather, is opposed to “testing with any invasive COVID-19 testing method, which involves the internal use of swabs treated with ethylene oxide,” Anesia Baptiste, one of its members, told a press conference last week.

“Upon seeing  these comments from the prime minister in this news story, the Thusia Seventh-day Church, we saw it fitting to respond because we do not wish for our position to be misrepresented and for the narrative, as it were, to be controlled by any other but us with respect to what our position is,” Baptiste said.

“And we need to make it clear to the public just exactly what the Thusia Seventh-Day Adventist Church said in the religious exemption application procedure that we partook in for our members.”

The United States’ National Cancer Institute says that at room temperature, ethylene oxide is a flammable colourless gas with a sweet odour.

The TSDAC clarified its position as a wide cross-section of public sector workers are to be vaccinated against COVID-19 if they are to keep their jobs.

The mandate came into effect on Nov. 19, and last Friday marked the end of the grace period by which public sector workers who have not been vaccinated or who had not received an exemption on religious or medical grounds would be considered to have forfeited their jobs.

Baptiste said that in applications for exemption from COVID-19 vaccination on behalf of its members, the church pointed the government to information that ethylene oxide can cause cancer.

Baptiste, quoting from a letter accompanying the applications for exemption, said that her church’s beliefs “do not permit our members, as a matter of conscience and health reform practices, to be a recipient of COVID-19 vaccination and testing with any invasive COVID-19 testing method, which involves the internal use of swabs treated with ethylene oxide”.

“So we were very specific as to what kind of testing we are opposed to and the prime minister, if he speaks about it, must rightly represent it.”

She said that in the letters, the TSDAC highlight scriptures that show its doctrinal position “is not to put harmful substances in our bodies, whether it be in food, drink, medication, medical products.