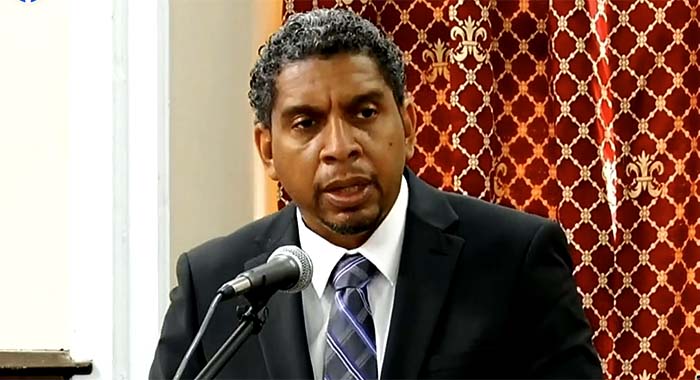 The approval of the figures paves the way for Minister of Finance  Camillo Gonsalves to present a budget for approval on Jan. 3, 2022.

The 2022 current expenditure, exclusive of amortisation and sinking fund contributions amounts to EC$727,017,441.

Gonsalves said that the improvement in revenue performance in 2022 “is reflective of what is anticipated to be a strong uptick in real economic activity projected for the year”.

Revenue from tax sources is expected to contribute EC$582.5 million to the Consolidated Fund, while non-tax revenue is estimated to gross EC$95 million.

Tax revenue is expected to increase by 5.3%.

Non-tax revenue collection is estimated at EC$95 million, a figure that is 1.7% more than the amount budgeted in 2021.

Gonsalves said that the amount in the 2022 budget under non-tax revenue is expected to come mainly from sales of goods and services, which is projected to generate EC$75.7 million in revenue — EC$0.7 million more than the amount collected in 2021.

Revenue from non-tax sources is also expected to come from inflows from other miscellaneous sources, totalling EC$2.1 million.

Gonsalves told Parliament that the total estimated recurrent expenditure, inclusive of amortisation and sinking fund contributions, is EC$931.9 million — 4.1% or EC$36.7 million above the amount budgeted in 2021.

Compensation of employees, which is up by EC$8.2 million, or 2.4% and  other transfers — which includes social assistance, training, grants and contributions to local regional international organisations — is expected to increase by EC$7.3 million or 5.7%. These account for the budget increase in 2022, Gonsalves said.

“Taking a look at the recurrent budget, from the point of view of the functional classifications, reveals the strategic focus of the government in 2022,” Gonsalves said, adding that the budget is concentrated in four main functional areas which call for 79.9% of the recorded estimates.

“Of course, as all honourable members know, these very broad headings contain a number of focus areas that may not automatically seem obvious, from as vague a title as ‘economic affairs’ or ‘social protection’, because many of those contain initiatives, fresh initiatives, that cover the gamut of ministries and interventions,” Gonsalves told lawmakers.

He said that other important strategic priorities of the government are health, and public order and safety, where 9.5% and 7.9% of the budget has been allocated, respectively.

Gonsalves said that the Public Sector Investment Programme (PSIP) for 2022 will see the government “continue to build upon earlier efforts aimed at improving the resilience of our public infrastructure as a small island developing state and the resilience of vulnerable populations in our country to the vagaries of climate change, and other external shocks and hazards”.

He said the short term benefits from the PSIP include employment contracts and other knock on effects of project spending throughout the economy.

In addition to this, the government is focused on the capital infrastructure investment, it will be making in 2022, to provide benefits over the medium to long term by increasing the capacity of the economy to deliver increased output that is to be growth enhancing.

“For this reason, this 2022 budget. increased attention will be paid to the important economic sectors of tourism, construction and agriculture, as these sectors are scheduled to receive targeted interventions aimed at stimulating growth,” Gonsalves told Parliament.

The financing of the 2022 capital budget amounts to EC$651.8 million, comprising:

The finance minister said that domestic receipts, estimated to be EC$105.2 million, is to be raised from domestic sources to finance the capital budget.

Revenue from the sale of government assets, namely Crown lands, is expected to realise EC$1 million, while local loans in the sum of EC$104.2 million will also be raised.

A total of EC$69.7 million will be raised from grants, of which EC$50.5 million dollars will come from multilateral organisations and EC$19.2 million will be received from a number of bilateral sources.

The main multilateral donors in 2022 are:

Of this, EC$171.1 million will come from multilateral creditors, and EC$40.5 million will be raised from bilateral sources.