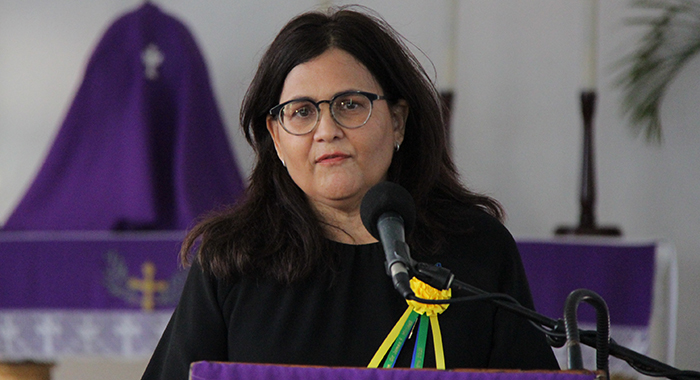 Our dad was passionate about politics, but he wasn’t solely a politician. He was an agronomist and a sailor. He was devoted to both the land and the sea.

As children, we got to live and experience his special interests with him. Our dad’s love of sailing meant that we, as kids, spent our summers sailing to the Southern Grenadines as well as to Martinique on our yacht “Sapphire”. Our dad was passionate about introducing us to new things like French perfume and French cheese and croissants, on our annual sailing trips to Martinique. We were too young then to enjoy the wine, but he certainly did. This early introduction to French culture stayed with me, and later in my life I studied design in France which is where I met my husband.

During these sailing trips to Martinique, we would stop off in St. Lucia and spend time with his brother, Reginald — Uncle Junior as he was better known — and his sister Aunt Gloria, as well as with our cousins and our grandmother, Lois Baynes who lived there. Our dad had a close friendship with Sir John Compton, the former prime minister of St. Lucia, and Lady Janice and so did we with their children.

During the later years, our dad spent much time in Bequia with his younger brother, Uncle George. In fact, during my time away from Bequia the last three years, my husband, Hayssam enjoyed frequent Sunday lunches at Helianthus with my dad, Uncle George and Aunty Dagrun. Hayssam’s close friendship with my dad always kept me close to him even if I was not in Bequia.

Our dad was born in Room 1 at the Frangipani Hotel in Belmont which, back then, was his family home. His mother was from Mt Pleasant and as such we always had a strong connection to this part of Bequia.

One of my earliest childhood memories was being woken up before the sun came up to water the plants at our small farm house, as our dad called it. We would huddle into his beat-up Land Rover and make our way up the winding roads to Mt Pleasant. If, by chance, we didn’t get out of bed fast enough to make it to the jeep on time, he would leave us behind and we would have to run up the hill. It was a good half hour jog uphill. Once there, we would have to pump the water with the hand-held pump to the overhead tank (the house had no electricity and thus no electric pump). The tall grass would scratch and cut our legs as we dragged the heavy hose from plant to plant. I didn’t particularly enjoy this task and at such a young age simply didn’t get it. Why so much effort to keep a small tree alive?

Often, we would spend weekends up at the little house. I loved it when we slept there as this meant we didn’t have to run up the hill at 5:30 a.m., but rather wake up to a hot cocoa tea and watch the sunrise quietly before watering the plants. During the day, he would teach us how to graft trees. We would look at insects and leaves under his microscope. He was eager for us to learn. Knowledge was important for him. He shared a deep respect and passion for learning along with our mum and we were fortunate to learn much from them both.

As night fell and the kerosene lamps came out, so did the poems and we would enjoy reciting poetry. Our dad would cook dinner and our mom would sit at the old-fashioned typewriter, typing and editing his political speeches. These were the days of his journey before becoming prime minister.

Fast forward years later, many of those trees are still alive at what is now villa Helianthus and they bear fruit. The watering of the trees in the dry season all made sense. The ones that did not make it were replanted and looked after by his gardener, Esau. Our dad would often remind us of the days we spent watering the trees as children and to put it simply, if you want to reap the benefits of something, you have to work hard at it and never give up. If one tree dies in the drought, the next rainy season you plant another one. He did not believe in giving up. Such a thing did not exist for him.

If I was in Bequia, he would call me and insist immediately that I come and pick the fruit if they were ripe. If I couldn’t make it that day and the fruit had fallen, he would scold me. Sometimes he would even go as far as looking at the weather forecast and letting me know the risk of the rain and wind blowing the fruit off that night. When my daughters showed interest in his fruit trees, he was thrilled. It then all became about them picking the fruit.

We were not the only ones that enjoyed his produce. Our dad enjoyed sharing whatever he had and many of his friends and our friends enjoyed him showing up for a visit, always with something to offer. He made friends of all ages. I realised later on that he wasn’t planting the fruit trees for himself. He enjoyed giving. All year round, he had something to give to someone special. He also enjoyed giving small plants he had propagated in his nursery.

Our dad gave to his country, to his friends, to his children and to his grandchildren.

What I learned, much later in life, was that for my dad, love, love was about giving.