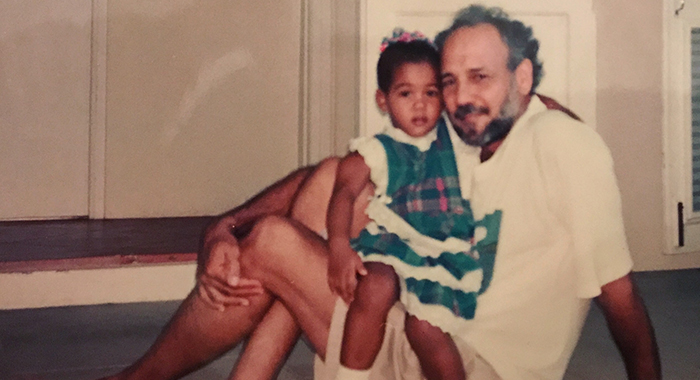 (Tribute to former prime minister, Sir James Mitchell by his daughter, Gabija Mitchell, delivered at his state funeral in Kingstown, on Saturday, Dec. 18, 2021.)

Protocol has already been established, and I believe you all to be distinguished guests.

I’d like to first clarify the pronunciation of my name. A name that my father found for me while in Hungary at a conference representing our great country. Gabija, pronounced “Gab-ya.” He named me after the Lithuanian Goddess of fire and household. A name fitting for the daughter of a man known affectionately as “Son”.

What a few weeks it’s been for myself and my family. Thank you all so very much for the outpouring of love we have received and for paying tribute to the respect you have for my father by being here. Whether you knew him or are just beginning to understand his story, know this — my father has been a father for each of us, and I wouldn’t have wanted it any other way. Because what a sun shining example of a father he had the capacity to be for us all.

There’s so much in a name — when he was born they yelled out, “It’s a son!” and the name stuck forever more. So much so that it was the catchphrase for one of his early campaigns as a member of the Labour Party was “Son our Star” which I then understood meant that he knew that he held the key.

I’m aware that many of the younger generation of Vincentians may not know just how benevolent a leader my father was, and why even in his passing he will continue to be a resounding force for our country’s success. Because he believed so much in the goals of each and every drop of Vincy sweat and even in his passing roads have been fixed.

So those of you who do not know him so well — allow me to tell you a tale of a young boy from Bequia — just like the ones you see running down the beach jumping off the docks. A boy who lost his father before they could get to know one another. A boy raised by his community — which, perhaps, is the genesis of this inspirational story about a boy that grew up without his dad who would become one of the most honourable founding fathers and community builders this nation has ever seen.

Like many of you this young child had a desire for further education and world exploration that led him to leave our shores and spend many years abroad. He travelled both regionally and internationally for school and then traversed his way through Europe  — where I imagine his appreciation of fine wine and food from different cultures began. There he immersed himself with the language and traditions associated with many different people; forever curious as to how other societies did things as he figured out his own place in this world.

Then came the “aha” moment. Like in every good superhero novel or movie.

The moment of resolve where a young man or woman’s life purpose becomes ever clear to them.

For him, it was the need to return home with the knowledge he gained and do his part to help his community continue to prosper.

His intentions pure, he felt the calling and his vision began to emerge — his moral compass etched in stone, forever pointing north over Bequia.

Politics would then make sense. To pay tribute to Son Mitchell one cannot only look at his political career as the full picture. Politics was simply the tool he used to keep his vision for his beloved Vincy alive. Maybe it’s because he and I began to get to know each other better once he retired and the work that I’ve done for myself spiritually — but I believe my father’s greatest achievement was that he knew what purpose the creator placed him in this world to fulfil and pursued it every day. His spirit being able to transition with a clear conscience.

What was his purpose you ask? If I could put it in a sentence, “To use his skills to provide opportunities for the success of the people of St.Vincent and the Grenadines.” He never rested without thinking of what he would do tomorrow to help someone from our community achieve their goals. “You must always have an agenda,” he says and would write his out every night before bed.

When he looked at you he looked for your potential and a way in which he would be of service. So many of you here today and around the world can testify to that. He not only fought for us but for the soul of the universe too. Growing up in the Grenadines teaches you to make something special out of limited resources. So, naturally, his vision for Vincy was that, as a community, we equip ourselves with the tools and ability to serve one another and by virtue uplift this nation. It was he who first put electricity in the Grenadines.

His dedication to Vincentian excellence is what led him to defeats and triumphs in every sphere. My father and I came from very different generations. He was born in the 30’s, I was born in the 90’s. Something we had to learn to appreciate about one another. He didn’t quite understand my direction in media and the arts at first. But he was also a fantastic writer, a poet, a fashion designer, singer-songwriter, a swimmer, an activist, a scientist, a gardener and what I enjoyed most — a wise comedian. All of these métiers contributed to his vision and stemmed from his goals for this country.

He was a true alchemist.

So to every young girl or boy reading now of his story — what I hope you can take from my father’s life is that you have the power to do anything once you align with the purpose within you and act through the best version of yourself along that journey. Allow every experience to inform your path and do not limit yourself within any boxes expected of you. My father certainly didn’t our community directly benefited from his battles. The path of a visionary is neither simple nor straight forward.

As we look back on a year of great trials and tribulations let us look heavily towards the abundance in our future for even our ash is laced with gold. Son Mitchell taught me to love a grey sky because it means the potential of rain falling upon the Grenadines and tanks being filled. Let us take inspiration from the life of one of our nation’s greatest architects — a man who fought to create a better future for the people of the Land of the Blessed against all odds placed against him. A man I’m so very blessed to have called my darling Daddy. Whose sun filled spirit will forever shine protectively upon the future of every citizen of this nation.

I love you so very much my daddy, thank you for being you, and appreciating me — as me.

You are my sunshine, my only sunshine

You make me happy when skies are grey

You never know dear, how much I love you

So please don’t take my sunshine away

2 replies on “Gabija Mitchell’s tribute to her father, Sir James”