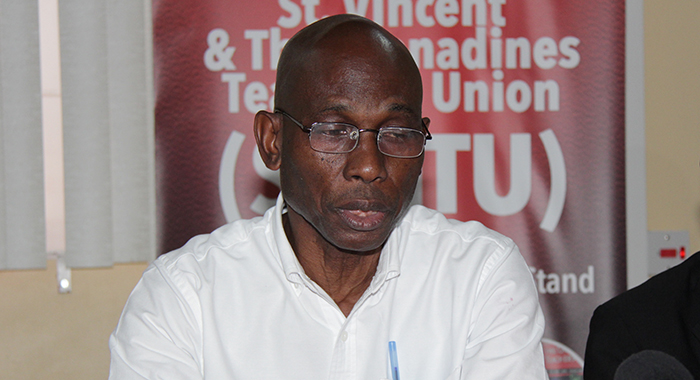 Lead counsel for the unions, Jomo Thomas speaking at the press conference in Kingstown on Monday, Dec. 20, 2021. (iWN photo)

The lead lawyer representing the trade unions in their legal challenge to the COVID-19 vaccination mandate for public sector workers in St. Vincent and the Grenadines says their case is different from those brought elsewhere in the Caribbean.

“We are very confident. And when we advise our clients, we always try to indicate to a client what kind of chances we have,” Jomo Thomas said Monday at a joint press conference of the SVG Teachers’ Union, the Public Service Union and the Police Welfare Association.

“And we remain confident that we have an arguable case, we have a  good case, we have a winnable case. And we are hoping to get past the first hurdle, very quickly, the court will grant us leave and that we will go to a substantive judicial review/constitutional issues in this case,” Thomas said.

On Monday, Thomas’ law firm filed legal documents asking for judicial review of the government’s decision. They have also filed a constitutional challenge to the mandate.

However, even before the legal challenge was formally launched, Anthony Astaphan, a Dominican senior counsel, said on Radio in SVG that Prime Minister Gonsalves had  put him on standby in anticipation of a lawsuit.

Astaphan expressed confidence that the government would triumph.

However, Thomas told the media on Monday that he was confident that the unions will win the case “once the court takes a dispassionate look at the Constitution.

“We have very, very strong confidence in the judges who sit in the civil division that they would look at our filings, they would look at, evidently, what the other side is coming with —  And they are coming with very experienced counsel in … Senior Counsel Astaphan, but we are never concerned so much with the experience or the person who’s coming.

“We are fundamentally concerned with the law. And we think once we match law to law, the court would come away thinking that our filing, our application or motion is in keeping with the law, and, therefore, that is the basis on which we premise our confidence in this case.”

The unions are bringing a case although regional and international courts have continually ruled in favour of governments and their vaccine mandates.

Thomas, however, said there are a number of things that are different about the union’s case.

“We believe that section 5(1), section 8(1) and section 8(2), which brings the the declaration of who are the persons who are labelled ‘frontline workers’ and ‘the dismissal, we think when you look at those, there is broad overreach in terms of what the state purports to do,” he said.

“For example, the police commissioner, and the Public Service Commission have told people, ‘Look, you are deemed to have stayed away from your work, and, therefore, you’re deemed to have resigned your work after a period of 10 days.

“We think that is procedurally improper and we are going to invite the court to accept our interpretation of why that is — and this is why we are talking about judicial review. Because it’s not whether they can do what they’re doing. The question is whether they do it properly, and whether what they’re doing is rational, whether what you’re doing is reasonable, and so on.”

Based on the law that brought the mandate into effect, a wide cross section of government workers were to take a COVID-19 vaccine by Nov. 19. There was a 10-day — calendar days in some instances and work days in others — grace period during which workers were not to attend work without being vaccinated.

Even if these unvaccinated employees attended their jobs, they were considered to be absent and guilty of misconduct.

Thomas noted that while the unions in SVG have filed a constitutional claim, this has not been done in the countries where legal challenges have been brought in the region.

“… but we think that under constitutional claim, we have, in our estimation, an unassailable argument. We are convinced that the declaration of the emergency by the government was done improperly. We believe that the declaration by the minister using the statute was improper because Section 17 of our Constitution says that this is the way you need to go. And they have not followed that way.

“The Prime Minister has said, ‘Well notice we didn’t follow it.’ But in essence, the way in which they have gone about it, they have given the minister more powers than the Constitution allows.”

He said that the government declared an emergency but has not gone back to Parliament to get an extension of that declaration.

“The Constitution clearly speaks about the way in which that is done. It talks about the fact that if you’re going to do an emergency, section 17(7) talks about getting the support of two-thirds of the Parliament, because what you’re intending to do is the possible infringement on the fundamental rights and freedoms of people.

“This government, with an ordinary majority has gone ahead and done, essentially, the same thing. And we believe when you put all of that together, the court is going to look at it, and the court is going to conclude that … what the government did, what the state did, what the institution did was improper and found it to be illegal, irrational, disproportionate. All of the fundamental grounds of constitutionality, I think … we have a very, very good chance of, where the court would find that the state overreached its mandate.”

The mandate has meant that some public sector workers have lost their jobs and accrued benefits, while others have taken the vaccine against their will.

Asked what are the practical implications if the court rules against the government, Thomas said:

“…  for persons who were forced to take a procedure, and then the court would find that the process was wrong and getting people to get there, the question would be, the whole question in law that injury invites reward.

“So if the person can point to an injury, because the government has yet or no government, as far as I know, has accepted liability.”

Thomas said that “injury” in this sense is not only physical.

“… So once people can point to an injury, then they can point to some form of damage, or whatever else. The other persons who have lost their job, if what you did is found to be illegal, then everything else that happens after that is illegal,” Thomas said.

He said this was the principle in the case of Otto Sam, an educator who the government illegally transferred to its emergency management agency then later fired.

Regarding when the matters are likely to be heard, Thomas said that the  civil procedure rule says that challenges such as the unions’ must be heard within a month.

“And then we would get a case management trial window scheduled as to where we are going to go. Our view is that this must be done — there’s a sense of urgency with these kinds of constitutional claims, because so many people have suffered as a result of the government’s action. And we are hoping that we can impress upon our court almost the kind of swiftness with which the Caribbean Court of Justice deals with these kinds of matters.”

He said it is possible that the state “may come with all kinds of delaying tactics” but said that his legal team is alert to this.

“And we will ensure that we point those to the court so that they are not allowed to do it. because they may want to just kick the ball down the road or kick the can down the road and see what happens. But we cannot allow for that because the rights of people have been so egregiously trampled that we think a court must come in and say, ‘Stop! Enough is enough! What you’re doing is wrong’,” Thomas said.