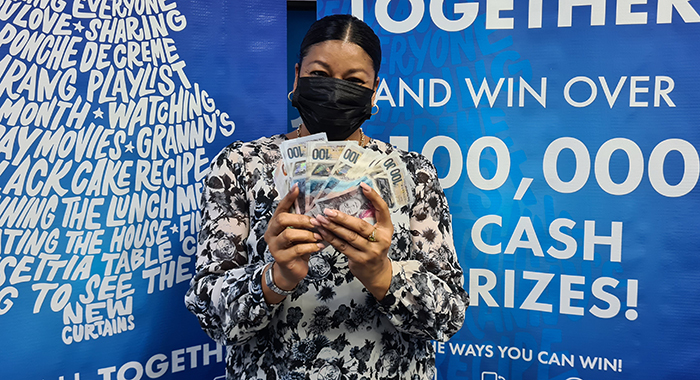 Telecommunications provider Flow, completed its “Get It All Together” Christmas promotion last Friday, in which over $100,000 in cash and prizes were given to its customers. The promotion, which began on Nov. 19, 2021, saw many of Flow’s customers winning an array of prizes just in time for Christmas and the New Year.

The randomly-selected grand prize winners were made up of customers who activated combo plans, paid a Flow bill in full, subscribed to new Flow services, people that switched to Flow or someone who bundled — added their postpaid and existing services hence the theme, “Get it All Together.”

“We are always happy to be able to engage with our customers in unique ways and this was truly a fun and rewarding experience for tens of thousands of our customers,” Nikala Williams-Rodgers, Flow’s Marketing & Communications for the Southern Caribbean said.

“Our customers come from all walks of life and have different wants and needs, so to have the types of prizes we did, is a plus.”

The Flow team also notified the pubic that each week there was not a $5,000 cash winner, the money will continue to accumulate.

“My girlfriend kept telling me about this bundle thing to save some money, but I was always busy. On December 1st, she called again and said to go now because the store was closing early for an event. So, I hustle up the road just in-time and got my services all in one,” Romique recounted to Wayne Hull, Flow country manager.

“I thought I won $1,500 and when I saw the card it was not until the draw ended it really hit me that I just win $15,000!” Hooper who is involved in physical education shared that he remained in shock for several days and was relieved upon collecting his winnings.

Persons who followed along on social media also won some prizes including: two air fryers, countless hams, bottles of wine, and free combo plans. The live recorded draws can be viewed on Flow’s Facebook page.

“The ‘Get it All Together’ Christmas promotion ensured that as many Flow customers as possible would have received a gift from the telecommunications provider,” the company said in a press release.