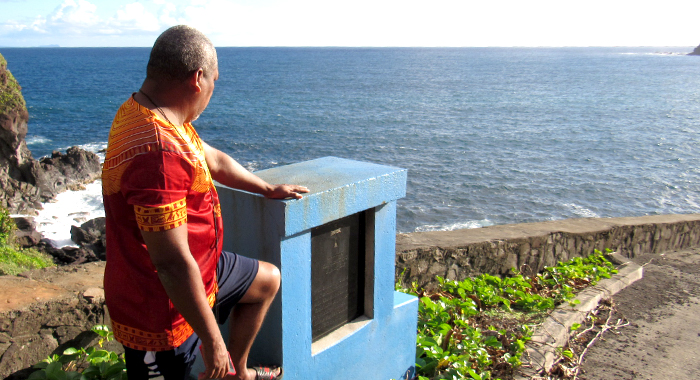 Hesran Ballantyne, father of Simonique Ballantyne, whose body was never recovered, looks out to sea at Rock Gutter on Wednesday, Jan. 12, 2022, the seventh anniversary of her death.

The parents of the seven students who died in the tragedy at Rock Gutter commemorated their deaths during a “personal ceremony” at the site on Wednesday, the seventh anniversary of the incident.

The students — Jamalie Edwards, 14, and his brother, Jamall, 12, Anique Alexander, 11, Racquel Ashton, 17, and Glenroy Michael, 16, Chanstacia Stay, 15, and Simonique Ballantyne, 13, all of Fancy — died on Jan. 12, 2015 when minibus HL636, in which they were travelling to school, careened down a steep section of road between Fancy and Owia and plunged into the sea in the North Windward community.

Upon arrival at the memorial site at Rock Gutter, the parents discussed, as one of their future projects, upgrading the monument that was erected in the children’s  memory .

After leaving the memorial site, the parents then went to the Fancy cemetery where the children are buried.

They spent some time at the gravesites laying wreaths and reflecting on the memories.

Meanwhile, Prime Minister Ralph Gonsalves remembered the students during the Budget Debate in Parliament, mentioning each by name on Wednesday.

“… that was a day of great sadness. I remember them every day. The families gave me a plaque, which I have from 2015. I have it up in the Office of the Prime Minister. And it’s one of the things I would leave when I leave that office and put it prominently in my own personal study. It is a difficult pain and anguish,” Gonsalves told Parliament.

“And every single year I remember them. Well, I remember them on an ongoing basis when I meet members of their families, too. So I want to recognise their passing  yet again and to say to the families that we continue to be with you and love you.

“And may Almighty God continue to bless each and every one of you. And you be steadfast. I know it’s not an easy thing to lose your young child. I believe I speak for the whole of St. Vincent and Grenadines today in that regard.”

In March 2017, Davanan Nanton, a then-36-year-old chauffeur and Ehud Myers, a pastor then 67 years old, were each freed of seven counts of involuntary manslaughter in connection with the death of the students when the court upheld no case submission by their lawyer at the preliminary inquiry stage.