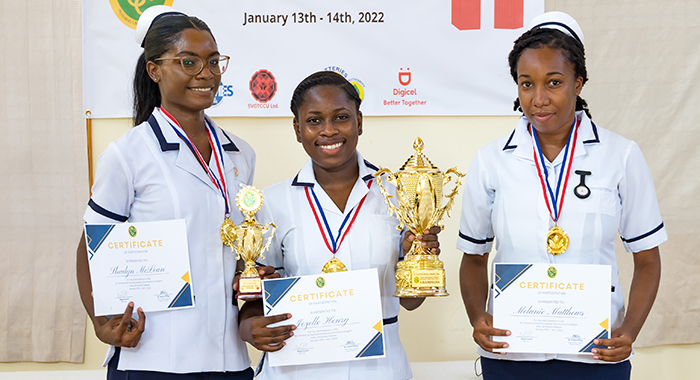 From left: Shadyn McLean, Jozelle Henry and Melanie Matthews of the Division of Nursing Education.

The Division of Nursing Education (DNE) emerged champions of the St. Vincent & the Grenadines Community College’s (SVGCC) 2022 debate competition, in a narrow 534-532 final round victory over the Division of Teacher Education (DTE).

The DNE opposed the topic, “The continued spikes in COVID-19 cases in the Caribbean are a direct result of Caribbean governments’ mismanagement of the pandemic” and argued that while spikes continue throughout the Caribbean, those spikes can be attributed to citizens disregard for public health policies and protocols, the continued promotion of misinformation and conspiracy theories about COVID-19.

The division also argued that despite the challenge of small economies, regional governments have effectively managed the pandemic with the limited resources available to them and have continued to introduce effective management policies which are adapted to suit the developing and ongoing pandemic.

The DTE, as the proposition, argued that while Caribbean governments’ implemented COVID-19 management policies, they failed to meaningfully and consistently enforce them, and that their lapse in enforcing policies were evident by spikes across the region, thus being a direct result of their mismanagement of the pandemic.

The DTE also argued that governments across the Caribbean failed to accurately identify their immediate needs in response to the pandemic, resulting in wastage of vaccines, lack of PPE and other necessary supplies, and that regional government officials have also failed to lead by example in adhering to policies they helped create.

Both teams advanced to Friday’s final after winning their preliminary rounds against the Division of Arts, Sciences & General Studies (DASGS) and the Division of Technical & Vocational Education (DTVE).

Nigel Scott, director of the SVGCC, in commending the debaters lauded the quality of debate and the depth of research presented. He expressed hope that the debaters will go on to elevate national conversations and that the competition aligns with the college’s new strategic plan, which includes more student-centred activities and involvement.

Communications & Marketing Manager of the SVGCC and Head Coach of the SVGCC Debate Society, B. Tedra Kirby, in her event closing remarks encouraged the public to support the SVGCC in its initiatives and that the support of the public is important, as the college’s debaters now move to prepare to compete in the upcoming Windward Islands Debating Competition (WIDC) set for March 2022. The SVGCC is the reigning WIDC champion.

The inter-divisional debate was live-streamed via Digicel’s PlayGo app and the SVGCC Facebook page. It was made possible through the support of corporate partners Gaymes Book Center, National Lotteries Authority, SVG Teachers Cooperative Credit Union and Digicel.