Poverty, other data prove SVG ‘going in the wrong direction’ 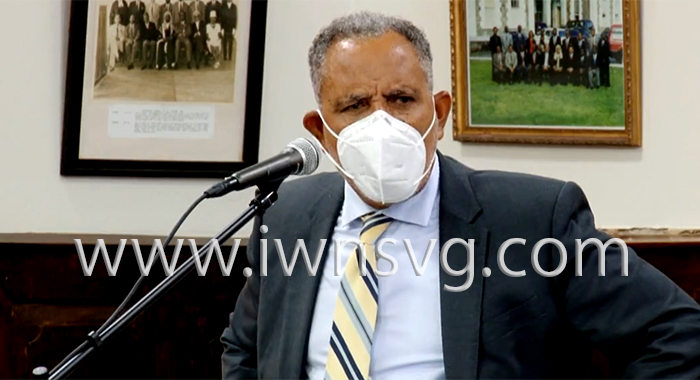 Poverty data from the last 10 years shows that St. Vincent and the Grenadines (SVG) is going in the wrong direction, despite the “fancy titles and beautiful jackets” on the Budget Speeches annually.

Friday located the budget within a global context in which some economies have started to grow, despite the COVID-19 pandemic.

“We hear in some countries that in some sectors of the economy they  can’t find workers, because things are moving so fast ahead,” he said.

However, in SVG, “we are in deep trouble”, he said, adding that the opposition had been saying for some time that the Vincentian economy was “misaligned”, in that what the government was focusing on “wasn’t bringing growth and sustainability going forward.

“The minister will want us to believe that all of our economic problems now are as a result of the pandemic and the volcanic eruption. That is when really things hit the fan, so to speak. That is not the case.”

“And for the five years leading up to 2018, the economy grew by an average of 1.5%. That is anaemic growth for small economies such as ours.”

“But the capacity to absorb shock was already very limited in our economy. And so when they came, they hit us very hard.”

A continuing structural problem is that SVG, perhaps has the highest unemployment in the OECS, Friday said, adding that the 2018 International Monetary Fund study Article IV Consultation found unemployment to be 30% overall and 46% among people aged 15 and 24.

“There’s also the problem of a lack of diversity in our economy,” Friday said, adding that this has been on the radar since the time of the government of the New Democratic Party, which was voted out of office in March 2001, after 17 years.

“Sir James Mitchell, when he was Prime Minister, Minister of Finance, was particularly concerned about this, because he saw that the movement away from bananas required greater diversification of our economy, not just in agriculture, but also outside agriculture,” he said of the former leader who died last November at age 90.

The opposition leader said that  agriculture must remain a pillar of the Vincentian economy.

“But we have to look for other areas in which we can make a living, provide jobs, meet the needs of our people, reduce poverty.”

He said there is no better way to reduce poverty than to create jobs and give people a chance to work for themselves.

“So the point is, it’s inadequate, though for some people. It is a lifeline. And I understand that…

“So giving somebody a job is the best way out of poverty.”

On the issue of  poverty, Friday noted that leaked government data in 2020 showed that in the decade ending 2018, indigence rose from 3% to 11 % while poverty overall increased by about 5 percentage points.

This “shows that we’re going the wrong way, no matter how much boasts you have, and what fancy titles and beautiful jackets you put on the budget speeches that are presented here from year to year,” Friday said.

Meanwhile,  in Grenada, a similar study around the same period showed that poverty had fallen by 13%.

“But St. Vincent and Grenadines for all the brag and boast of the members of the government and of successive ministers of finance about all the stuff that they’re doing for poor people in this country — always calling up poor people name, what they have done over the last 10 years is to make more people poor.”

Poor healthcare Friday said that because of the poor health care and the poor health infrastructure in this SVG, “Anyone who can afford it gets out of the country whenever they become ill, or need to have surgery or some diagnosis because they don’t rely on a diagnosis and the treatment here.”

He said that half the time the equipment is not functioning and medical staff “are working with very little to get their work done.

“That is, in itself, also a serious disincentive for investment, especially by foreign investors in our country, and is a drag on development and growth.”

High crime is another issue that has plagued SVG over the years, the opposition leader said, adding that in addition to the pain it causes to the victims, it frightens away investors, especially those from abroad.

“That, naturally, has a dampening effect on the economy. That has been a problem and a growing problem over the course of the past decade or two,” he said, noting that he and his colleagues walked both sides of St. Vincent in 2018 to call attention to the problem.

The opposition leader spoke about “the unreliable criminal justice system” in SVG.

“… the entire justice apparatus, the court system, the level of independence that there is, that is particularly important for persons who are looking to St. Vincent as a potential place to invest and to come and live.

“They have no confidence, and that is one of the things that frightens them away, and we lose any potential investment that may come from that.”

He said this is a problem that the opposition and other entities have highlighted in the recent past, through protest in Kingstown, advocacy in the media, and even internationally “to ensure that Lady Justice remains blindfolded so that she doesn’t pick favourites.

“That does not seem to be the system here in St. Vincent and Grenadines.”

Friday spoke also about the Unity Labour Party administration’s “historic hostility” to and rivalry against the private sector.

“I see since the last couple of budgets, there’s this attempt to embrace the private sector and to suggest that somehow, this is the government that always looks for the interests of those persons who want to use the entrepreneurial talents to develop themselves and, consequently, develop the communities in a country.

“But we know what has happened. We’ve seen high profile examples of individual business persons who, though are very successful, they have been humbled by this administration, because  their politics was misaligned. Marcus [De Freitas] and Bigger Bigs — well Bigger Bigs is the poster child for that in this country.”

Friday, however, noted that in the early days of the administration, the government threatened to compete against the Bonadies, Greaves and Veiras with a view to driving them out of business because they were perceived to be NDP supporters.

“If you don’t show the political line 40, 50 people could go home. They don’t care. And now all of a sudden, ‘private sector’. They are private sector, too,” the opposition leader said.

He said that the government now wants to engender trust and confidence in the private sector so that they would invest.

“Well, we think that’s a good thing. In fact, that’s why we have proposed some time ago, and continue to do so that in order to show the signal our commitment to saying that our local private sector, foreign investors, as well, are key to the development of our country, we would create a ministry of the private sector to facilitate the development of local entrepreneurs, business people, give them opportunities to expand.

“Don’t look jealously at them to say, ‘Boy, that fella getting too big, or that woman getting too big. They have too much money’ and find ways in which to bring them under manners. There’s too much of that going on in this country.

“But we have to look at the opportunities as they present themselves to those people, those local business people and to help them to develop, let them grow. And the only thing that should matter is their ability to run the business, their capacity for hard work and their prospects of success. Don’t put obstacles in their way.”

2 replies on “Poverty, other data prove SVG ‘going in the wrong direction’”