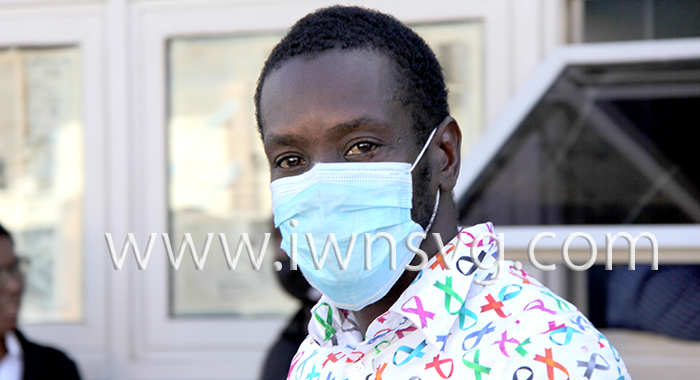 A Trinidadian man who told a St. Vincent court that he fled his country in 2019 after a “peace treaty” ended a “war” there, is wanted by homicide investigators in Trinidad.

On Thursday (today), at the Kingstown Magistrate’s Court, Senior Magistrate Rickie Burnett imposed a nine-month prison sentence, suspended for one year, on the man, who Interpol confirmed to be Nekeiva Glasgow, of Upper Haig Street, Carnage, Trinidad.

The sentence was handed down after Glasgow gave police in St. Vincent a false name, to wit “Jerome Roberts”.

In presenting the facts of the false name charge, Sergeant 172 Atnel Ash told the court that on Monday, the defendant was brought before the said court by Senior Immigration Officer Helen Harry, charged with four immigration offences.

Glasgow gave his name to Harry as “Jerome Roberts” and the charges were brought under that name.

However, Inspector of Police Noland Dallaway of the Rapid Response Unit, whose team had arrested Glasgow in Arnos Vale on Saturday and handed him over to immigration authorities, continued to investigate the accused.

Dallaway and his team sent via Interpol a photo to the Trinidadian authorities who responded, giving the defendant’s name as Nekeva Alwyn Glasgow, born Aug. 19, 1985, in Port of Spain, Trinidad and Tobago.

PC 606 Thomas interviewed the defendant and he told her, ”Officer, I was frightened. My name is Nekeiva Glasgow.”

In handing down his sentence, Burnett noted the removal order he had given three days earlier.

He asked Ash if any other authorities had any other interest in the defendant.

Ash said that the correspondence sent to the Vincentian authorities also indicated that Glasgow was wanted by homicide investigators in Trinidad and Tobago.

Ash confirmed that the maximum sentence for the charge was three years in prison.

Burnett said that having regard to facts and circumstances, the court was imposing the suspended sentence.

The senior magistrate explained the sentence to the defendant, noting that while if he commits any offence in SVG during the next year, he would be jailed for nine months, in effect, he would not be in SVG, as he would be deported.

‘I going back Trinidad?’

“What you saying now? I going back Trinidad?” the defendant asked.

“That is not determined by me?” the senior magistrate said.

“Do I have to go back in immigration hands?”

Burnett told the defendant that he would be in the hands of the state until he is taken back to Trinidad.

“Come like you have been lenient with me to send me back home,” the defendant said.

“There is no place like home. Enjoy Trinidad and Tobago,” Burnett said.

Living illegally in SVG for 2.5 years

Meanwhile, on Monday, Glasgow told the court that he had been living in St. Vincent illegally for two and a half years as he was seeking a better life after a “peace treaty signed because there was war in Trinidad”.

Mitigating on his own behalf after pleading guilty to four immigration charges, Glasgow said he had had no run-ins with the law during his time in the country.

— being a prohibited immigrant, he entered the state by boat without a passport;

— he entered the state of St. Vincent and the Grenadines other than a port of entry;

— he entered the state by boat and disembarked without the consent of immigration officer; and,

— he knowingly and wilfully allowed himself to be landed as a prohibited immigrant.

The facts of the matter, given by acting Corporal of Police Corlene Samuel, are that on Feb. 4, 2022, around 12:40 p.m., acting on information, PC 606 Thomas and officers from the Rapid Response Unit, headed by Inspector Dallaway, went to an abandoned house opposite Tree House Night Club in Arnos Vale.

The officers met Glasgow at the house and questioned him about his name, travel document and purpose for being in St. Vincent.

Glasgow replied, “Officer, I have no travel documents. I came here on a yacht and I am here for two years now.”

The man was detained and brought to the Central Police Station and handed over to immigration authorities.

Senior Immigration Officer Harry cautioned and interviewed Glasgow, who admitted to entering St. Vincent and the Grenadines without travel documents.

All ports of entry were checked and there was no record of Glasgow entering the country.

Glasgow told the court that he had relatives in Chateaubelair and Belmont, and visited those in the north leeward town around Christmas.

He accurately indicated the geographical location of each of those communities.

Glasgow told the court that during his time in St. Vincent, he was working doing landscaping and construction.

The man said that he lived in Arnos Vale, and the people he was living with went overseas.

Glasgow said he was living on the “country” (windward) side of St. Vincent when the volcano erupted in April 2021, so he moved to Lowmans Hill.

looking for ‘a better life’

The man said he came to SVG because he was looking for “a better life” because that is when “the peace treaty sign in Trinidad and Tobago.

“Remember they used to have real war in Trinidad and Tobago – like men warring”.

He said he came to St. Vincent because he wanted to “start from scratch” and “stay away from certain activities”.

Glasgow said that police in Trinidad told him that it would be good if he went away.

The defendant said he came to St. Vincent and never got into any trouble.

“How do you feel about this, because you are going back home?” Burnett asked the defendant.

Glasgow told the court that the person he was staying by last week said they would assist him with TT$3,000 to go back.

He said that he had decided to return to Trinidad, spend two months and return to St. Vincent legally and open a business.

Glasgow reiterated that he was in the country two years.

“I never got caught up in no criminal activities in this country,” he told the court.

“‘In this country’?” the magistrate said.

“Never. Never,” Glasgow said, adding that he came to St. Vincent with good intention and wanted to become an itinerant trader between St. Vincent and Trinidad.

Glasgow told the court that he was from St. James, Trinidad.

The magistrate also made an order for Glasgow to be removed from the SVG.

He said the money is to be paid forthwith, adding that from what he has observed that is easy for people on immigration charges to pay.