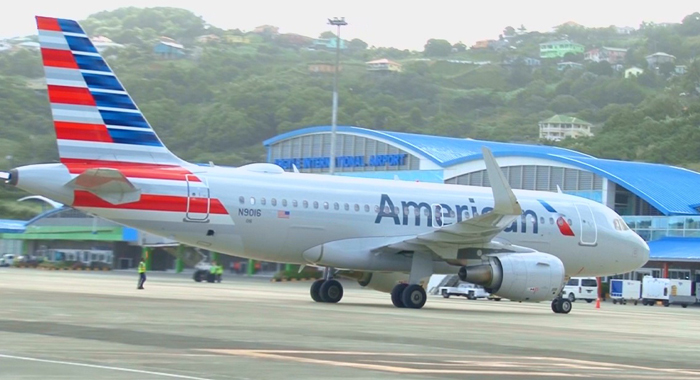 A passenger spoke to iWitness News around 6:55 p.m., saying that boarding of the flight, which was scheduled to depart at 4:44 p.m., began about 25 minutes late.

No explanation was given for the delay, the passenger said.

The passenger said that after the boarding was complete, the aircraft pulled away from the gate and was taxiing for about five minutes when the “strange noise” started.

The captain announced that something was “wrong” with one of the “take off signals” and the flight could not depart, the passenger said.

“They pulled back to the gate and we have been at the gate from then until now trying to fix it.”

The passengers said they did not observe anything being done inside the aircraft.

“The entire aircraft was shut down and it was dark inside. Then turned it on and nothing.”

The last communication from the captain was about 30 minutes before the phone call, when travellers were told that there was no sign of progress, the passenger said.

The passenger told iWitness News that the captain had expressed hope that there would be news soon to let them know if they would depart.

The passenger said that fellow travellers were sitting quietly, many of them using their phones, informing people about what was taking place.

“For the most part, people are not complaining — as yet,” said the passenger who did not have urgent business in the United States.

iWitness News contacted American Airlines at Argyle International Airport but the person answering the call said that they are not autorised to speak to the media.

They gave us a telephone number to the company’s media centre. However, repeated calls to the number, which appeared to be to a location in Keller, Texas, United States, went answered.