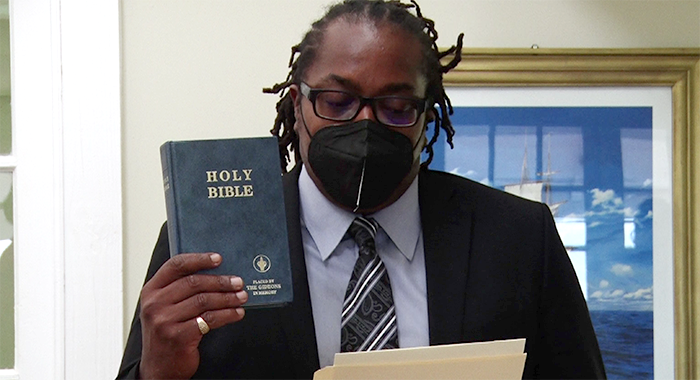 After having his senatorial position revoked on Jan. 14 to allow the government to appoint a new senator to facilitate the passing of the 2022 Budget, Rochard Ballah, was re-appointed a senator and Parliamentary Secretary in the Office of the Prime Minister during a ceremony at Government House on Tuesday.

Under the relevant provisions of Section 28 of the Constitution of St. Vincent and the Grenadines, which outlines the directives for Senator Ballah’s demitting office and consequent appointment of the Rene Baptiste as his replacement, the work of the government and subsequent approval of the 2022 Budget Estimates continued undisrupted.

Following he took the Oaths of Allegiance, of Office and of Secrecy, Governor General Dame Susan Dougan congratulated Ballah on his reappointment and also used the opportunity to recognise Rene Baptiste for her continued commitment to nation building as “a true patriot and outstanding Vincentian, who always rose to the challenge where it pertains to moving our country forward”.

Prime Minster Ralph Gonsalves, who was also present, said that notwithstanding “the exigencies of certain circumstances and the problem with the pandemic the Constitution provided the flexibility to ensure that representative government was given its full flowering and fruition”.

The prime minister further thanked the Baptiste for her contribution to the debate and remarked that her transition back to the House of Assembly was seamless “as if she hadn’t left the House and [she] dealt with the issues at hand very competently”.

Ballah’s re-appointment came just as he was set to accompany Gonsalves and a contingent representing St. Vincent and the Grenadines at the World Expo 2022 in Dubai, which will feature SVG for five days from Feb. 14.