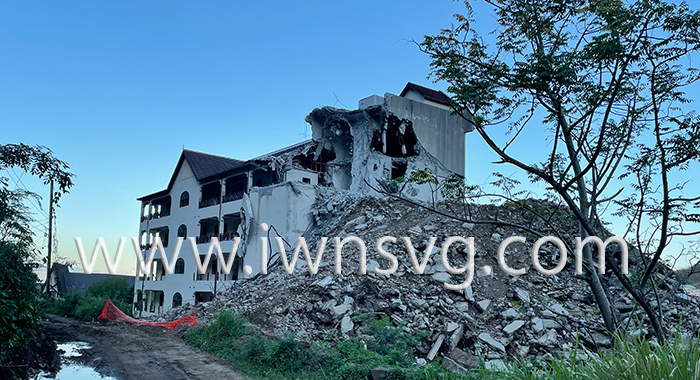 This photo, taken Jan. 13, 2022, shows a building at the former Buccament Bay Resort being demolished to make way for Sandals’ Beaches SVG.

Adam Stewart, executive chairman of Sandals Resorts International, has announced that Sandals will increase its investment of US$100 million in the proposed Beaches St. Vincent and the Grenadines Resort.

The Ministry of Tourism said on Thursday that Stewart made the announcement on Monday during a visit to St. Vincent to give a status update on his company’s plans for the construction of the 350-room Beaches Resort at Buccament Bay.

The ministry did not say by how much the investment would be increased.

Stewart and his team, while presenting the design concept for Beaches Saint Vincent and the Grenadines Resort, expressed their excitement about the project, the release said.

“I can assure you, this hotel will be second to none of anything we have ever done, anywhere it will be a bold statement not just for the destination but more so the evolution of the Sandals brands and guest experiences alike.”

Minister of Tourism, Carlos James, in acknowledging his satisfaction with the ongoing project said:

“We look forward to the construction and operational phase of Beaches St. Vincent and the Grenadines Resort, which will be the first of its kind in the Eastern Caribbean.”

James said Beaches St. Vincent and the Grenadines Resort is now projected to employ more people during its operational phase.

Noting that with other major investments expected within the tourism sector, James  said that this will catapult SVG’s tourism product, stamping the destination as a true industry leader and the most diverse tourism destination among small island developing states.

“We are positioning our destination and our nationals to take full advantage of the expected boom within the tourism industry, this includes boosting our existing room stock by over 1200 within the next few years, new and additional flights from our source markets, opportunities for linkages for farmers and fishers and sustainable livelihood programmes through community tourism,” James said.

Prime Minister Ralph E. Gonsalves, Minister of Finance Hon. Camillo Gonsalves, other members of the Cabinet and staff from the Ministry of Tourism, Civil Aviation, Sustainable Development and Culture, Invest SVG and the SVG Tourism Authority also attended the presentation.

5 replies on “Sandals to increase $100m investment in Beaches SVG ”