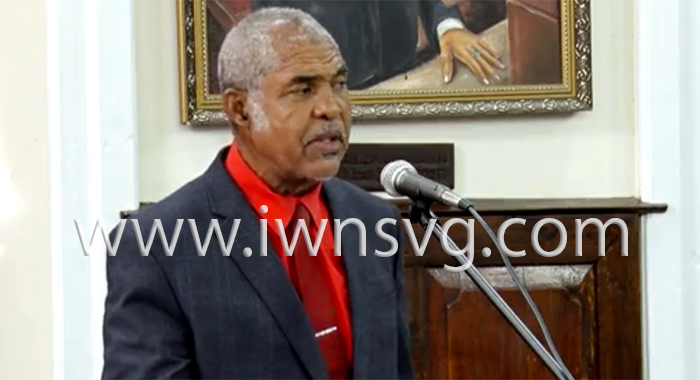 Parliament spent six hours on Thursday largely hearing government MPs singing the praises of the Unity Labour Party, which will, on Monday, celebrate 21 years in office.

“I am very respectful to the prime minister because I have sat in the presence of the prime minister along with other intellects not only here in St. Vincent and throughout the Caribbean but in the wider world,” Deputy Prime Minister Montgomery Daniel said.

He was speaking around 4:30 p.m. when the session, which began at 10 a.m., resumed after a break for members’ convenience.

The break came after Central Kingstown MP, St. Clair Leacock, an opposition lawmaker, complained that the session had gone on for six hours continuously.

However, Daniel, who was the leader of government business in the absence of Prime Minister Ralph Gonsalves, who was absent because of illness, said it was usually the practice to break for lunch after completing an agenda item.

Nonetheless, House Speaker, Rochelle Forde, said that she, too, needed a break and suspended the sitting around 4 p.m. for 10 minutes for members’ convenience.

When the session resumed, Daniel, using the incorrect grammar that West Kingstown MP Daniel Cummings had pointed out to Education Minister Curtis King earlier in the session, said that Gonsalves “would have been a force to be reckoned with.

“I want to thank him for the knowledge he had imparted not only to me but to others throughout St. Vincent and the Grenadines.”

Daniel also thanked and congratulated Gonsalves “for his courage for he has stood up to many nations and people who think they are of much more higher standing”.

Daniel, who was elected in 2001 and has been a cabinet minister since then, thanked Gonsalves “for his stewardship”.

“I really realise that many would have benefited tremendously as he would have been the leader of our party and this country.”

He said that  when he reflected earlier Thursday morning on  Deuteronomy 20, he saw Gonsalves as “a tree that we should prune and fertilise so that he can continue to bear fruit for St. Vincent and the Grenadines”.

Daniel said he recalled that on Dec. 8, 1998 Gonsalves made three promises: that he would insist that there be a general election before 2003; that the ULP would win the next election; and, that it would be in government for a long time.

Daniel said that in 2001 Gonsalves assembled “a great team to take this party forward”.

He mentioned the ULP candidates who were successful in the 2001 elections.

The vote came about 2.5 years early, the ULP having used protests and roadblocks to force the then New Democratic Party administration to return to the polls after the 1998 vote in which the NDP won a majority of the parliamentary seats but the ULP won the popular vote.

“And after we won the elections, we began to build a country and to bring back respect to a rudderless country… St. Vincent and the  Grenadines, at that time, seemed to be sailing in the wind, without a rudder.”

Daniel said that Gonsalves’ theme “from day one was to ensure that we build a post-colonial many-sided competitive economy. And I can say to you that many nights I would  leave the Cabinet 10, 11 o’clock and up to 1 o’clock in the morning.

“And when we say, ‘Prime minister, it’s already midnight’, he would say, ‘We have five years’ work to do for 20 years.'”

During his presentation, opposition lawmakers reminded the deputy prime minister that he was speaking under the agenda item “congratulatory remarks” and not a debate, a point with which the speaker agreed.

At various points during the six hours, opposition lawmakers said it was ridiculous for parliament to spend so much time on congratulation, when there was a full order paper to complete.

Daniel went on to speak about the “education revolution”, saying that Gonsalves had insisted that this be implemented within the ULP’s first five-year term in office.

He said that before the ULP came to office there would not have been many young students on the streets of St. Vincent and the Grenadines speaking different languages.

“And I am happy that the education revolution has offered different languages to us so that we can participate in international affairs across the world.”

He said the government has since gone past 2,000 houses, and with the volcano having damaged or destroyed 600 homes, the ministry will continue to repair houses to bring a better way of life to those affected.

Daniel said that the government worked on social security “because those days, poverty was very vivid in this country”.

He said that the government improved healthcare and public infrastructure.

“We ensured that we worked on good governance and rule of law. And in all of our work, the comrade leader insisted to that extent we would not have never seen anyone in our team resign, fired, or sent home for any cause. I am happy that I would have been part of a team that would have brought tremendous benefits to this country.”