‘The Outlaws’ killers get 8, 10 years in prison 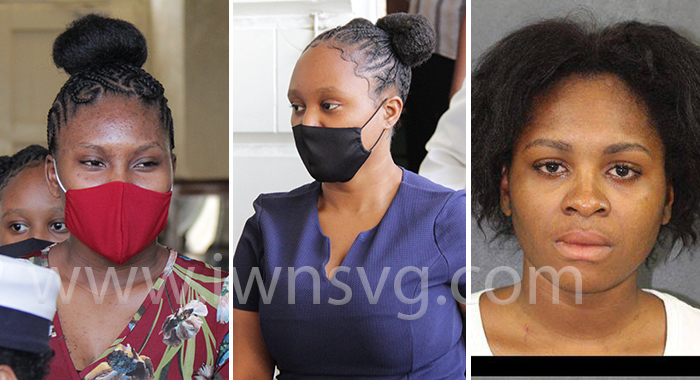 From left, Taylor Mofford and Alana Hudson outside High Court No. 1, on Wednesday, April 13, 2022, and Twanecia Ollivierre in a September 2017 police photo.

Two of the three women involved in the stabbing death of a woman in her yard in September 2017 were today (Wednesday) jailed for 7 years and 6 months, while their co-accused has been ordered to serve a sentence of 9 years and 9 months.

However, Alana Hudson, of Campden Park, and Taylor Mofford, of Belmont, will only spend a further two years, 10 months and 22 days in prison, while Twanecia Ollivierre, of Chapmans, who inflicted the fatal stab wounds will remain behind bars for  5 years one month, 23 days from today.

The women had spent 4 years, seven months and seven days on remand after being arrested and charged with murder in connection with the Sept. 4, 2017 death of Simonia Da Silva, 23, of Fair Hall,

After negotiations between their lawyers and the Office of the Director of Public Prosecution, the charge was reduced to manslaughter and the women pleaded guilty in February.

In presenting the facts of the case at High Court No. 1, in Kingstown, Justice Brian Cottle said the women were apparently members of a group of young people calling themselves “The Outlaws”.

On Sept. 4, 2017, they were at a club in Fair Hall, where an altercation broke out involving Da Silva’s family, the trio and others.

Da Silva and her relatives left the club for home and the trio followed them.

The hostilities resumed in Da Silva’s yard, where she received stab injuries.

She was taken to hospital, where she died.

He said there might have been an element of revenge as Ollivierre had been injured by Da Silva with a broken bottle some months prior.

Justice Cottle said Da Silva received a wound to the upper anterior chest, angled downward from front to back, penetrating the root of the aorta.

The sacs around Da Silva’s heart were found to contain 300ml of blood.

Further, she had a wound to the back, some 20cm below the seventh cervical vertebrae.

The judge said that he saw no reasons to depart from the sentencing guidelines, which he said attempt to promote consistency and predictability in sentencing.

He said that when sentencing someone for manslaughter by reason of an unlawful act, the court must first consider that the unlawful act has had the most serious of consequences: the loss of a human life.

He said that the guidelines establish three levels of seriousness of the offences, and the court finds that it is at medium level, something on which the prosecution and defence were also agreed.

“That is because death was caused in the course of an unlawful act in which there was defence of self, which did not amount to a defence. The force used was excessive and went far beyond what was needed for self defence.”

Justice Cottle, therefore, adopted 12 years as the starting point of his sentence.

He said the aggravating features of the offence were that it was committed with use of a bladed weapon and in a group attack.

The court found no mitigating feature of the offence.

The prosecution had submitted that there were no aggravating features of the offender and the court agreed.

Regarding the offenders, the judge said that Mofford was young, just 18 years old at the time of the offence.

She had no previous conviction, Justice Cottle said, adding that he is told that Mofford is seen as a good candidate for rehabilitation.

He said the facts revealed that she played a lesser role in the killing in that she was not the wielder of the knife used in the fatality.

Hudson was 20 years old at the time of the offence, had no previous conviction and was viewed as a good candidate for rehabilitation.

She also did not wield the knife, played a lesser role in the crime,

Ollivierre was 19, had no previous conviction, was seen as a good candidate for rehabilitation and had shown genuine remorse not only in her submission to the court through her lawyer, but by her guilty plea.

He noted that affidavits of support had been filed in mitigation.

The judge noted that Ollivierre concluded her secondary education but not her post-secondary training due to her family’s economic circumstances.

The court noted that her employment at Bequia Plantation Hotel was cut short when the hotel was being renovated.

The court also noted her apology to the state and family of the deceased and her prayers for their forgiveness.

While the defendants were truly remorseful, they emphasised that the knife was introduced by the sister of the deceased, Justice Cottle said.

He concluded that in the case of Hudson and Mofford, the mitigation features outweighed those aggravating.

The judge, however, noted that Ollivierre had inflicted the fatal injury.

He, therefore, reduced the starting sentence for Mofford and Hudson from 12 to 10 years and increased Ollivierre’s from 12 to 13.

Since the women’s guilty plea did not come at the first opportunity, the judge granted them a 25% discount on their sentence, rather than 33%.

This resulted in a notional sentence of 7 years and 6 months for Mofford and Hudson and  9 years and 9 months for Ollivierre.

The court then deducted the 4 years, seven months and seven days that the trio has spent on remand, resulting in the ending sentences.

The women were initially slated to be sentenced on April 1, but Ollivierre’s Counsel Michael Wyllie withdrew from the case on that day, resulting in an adjournment.

Bacchus-Baptiste and Daniel mitigated on behalf of their clients on April 1.

After the sentencing, Da Silva-Mc Kenzie stood and noted that at her first arraignment on April 30, 2019, Hudson had pleaded guilty.

The judge noted that after consulting with her then lawyer, Ronald “Ronnie” Marks, Hudson had withdrawn that plea.

Daniel then rose and inquired about whether the court had granted Mofford any reduction for the mitigating factors in addition to her youth.

The judge said that the reduction had taken into account all of the mitigating features.

However, Daniel seemed to suggest a further discount could be in order.

“The sad fact remains that a young citizen has lost her life and that cannot be undone. The sentence, as it stands now, requires her to serve a period of just under three years from today.”

“Yes, but in terms of the methodology for the calculation, from what was previously advanced, the 12 was reduced to 10 in relation to the fact that it was a lesser role…”

Justice Cottle responded that the court had taken all of the mitigating features into account.

He further explained what had tilted the scale against Ollivierre.

“Very shortly we will be facing the outcry of social media which would say that the sentences were far too lenient.”

Daniel said that the court’s standard of justice does not depend on “those self-proclaimed advocates in relation to social media”.

He said he was sure that neither the bench nor bar pay much attention in that regard since they are sworn not to. “That is true,” the judge said.

Apologies and prayer for forgiveness

In her mitigation ahead of the sentencing on Wednesday, Knights adopted the written submissions of Ollivierre’s previous lawyer.

She noted Ollivierre’s age at the time and her education, having graduated from Georgetown Secondary School with five grade 2s, before pursuing the culinary arts at the Technical College, which she was forced to quit for financial reasons.

She said that Ollivierre used to attend church but stopped doing so when she began working at Bequia Beach Hotel.

“She further indicated to me that she was truly remorseful and not a day goes by that she does not think of this incident and regret what transpired,” Knights told the court.

The lawyer accepted the starting sentence suggested by the Crown but asked the court to take account of Ollivierre’s version, in which the weapon used in the commission of the offence originated and was introduced by the sister of the deceased.

“And we humbly request that the court take note of this and the versions of what was given by … [Ollivierre] is supported but the report of injury form for [Ollivierre] and I wish to remind the court that at all material times [Ollivierre] sought to assist — gave a caution statement, has time and time again expressed remorse for the incident.”

She spoke to the stages set out in the sentencing guidelines and submitted that having regard to the culpability and seriousness that it falls within level C.

Knights said the Crown had assessed it at level A and the defence disagreed for the reasons she had outlined in terms of defence of self and the defendant being reckless.

“We do not say that it was obvious or that she played a leading role. The evidence suggests that it was a group of persons where there was this melee of persons in the yard.”

Knights said there seemed to have been “a melee of persons in the yard, in circumstances where there was cutlass, bottles being pelt”.

She added that it is fortunate that more persons were not seriously injured, but given what transpired between the deceased and Ollivierre, it is unfortunate that it led to her death but nothing else suggests Ollivierre was the one leading “this group or melee of persons”.

The lawyer also disagreed with the Crown’s suggestion that it was a premeditated act and, thus, maintained that level C seriousness being medium is more appropriate in the circumstances.

The lawyer submitted that the starting point of 12 years was appropriate and she further re-adopted the mitigating and aggravating factors as outlined in Wyllie’s submissions.