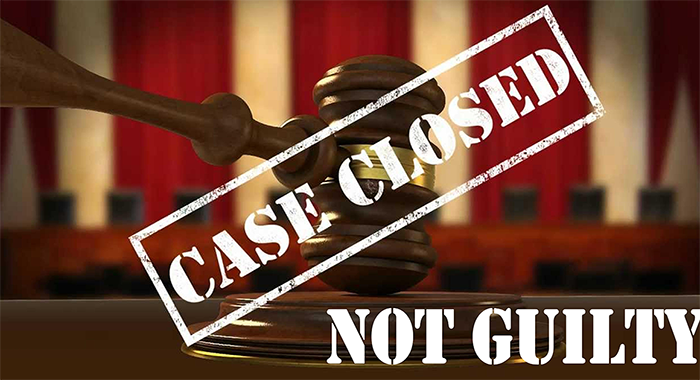 A man who was sentenced in 2012 to 43 years in prison for rape, aggravated burglary, and wounding was, on Tuesday, found not guilty of the same offences after his fourth trial, two of which were abandoned.

Defence counsel Michael Wyllie, who represented the accused, Jolan Hepburn, in the three subsequent trials, successfully argued that the virtual complainant had misidentified his client as her assailant.

“The most ridiculous issue, in this case, is that the police had, in their possession, the two most definitive pieces of scientific evidence to establish the identity of a person and did not utilise them: i.e., DNA and fingerprint. No two persons have the same DNA or fingerprints; not even twins,” Wyllie told iWitness News via email after his client’s acquittal.

The trial hinged on the identity of the man who the virtual complainant (VC) said raped her after striking her in the head in her home in April 2012.

“Identification evidence is the most unreliable form of evidence,” Wyllie said, noting that the Court of Appeal is so concerned by the possibility of mistaken identification that it issued the Turnbull guidelines.

The guidelines direct the trial judge to inform the jury about the need for caution when assessing identification evidence.

Wyllie noted that the woman testified that the assailant placed a plastic bag over his penis before raping her.

“The police recovered the plastic bag with the sperm that was allegedly discharged by the assailant and did not test it for DNA nor did they conduct a fingerprint examination of the Pyrex dish that the assailant reportedly used to strike the VC in her forehead, nor any of the other things that the assailant allegedly touched in her house,” the lawyer said.

“According to the VC, the assailant was not wearing any gloves. Therefore, it would have been relatively easy to recover fingerprints from the things he touched.”

The trial heard that investigators requested that the semen and Pyrex dish be sent overseas for analysis but this was not done.

“… it is most unfair and irresponsible of any government not to put the necessary mechanisms in place to conclusively prove or disprove the identity and guilt or innocence of an accused. This is a high mark of injustice.”

On Tuesday, a jury of five women and four men returned not guilty verdicts on each count of the indictment, ending what might be a High Court trial spanning the longest period in St. Vincent and the Grenadines in recent time.

The trial began on Dec. 7 before Justice Angelica Teelucksingh at High Court 2, in Kingstown, and had to be interrupted several times because of COVID-19 infections or other ailments among persons involved.

However, the length of the trial pales in comparison to the amount of time that Jolan Hepburn spent in legal jeopardy.

Hepburn did not have a lawyer in 2012 when the jury found him guilty of all charges after deliberating for two hours and 47 minutes after a trial before Justice Frederick Bruce-Lyle.

During that trial, in the absence of the jury, Bruce-Lyle had told Hepburn that the evidence against him was overwhelming and that if the jury found him guilty, he would sentence him “heavily”.

The virtual complainant, then in her 40s, told the court that she was awakened by a noise, having secured her home before going to bed.

Initially, she dismissed the noise because she lives close to the main road.

However, she later decided to look into the source of the noise, and her attacker struck her over the head with a Pyrex dish as she opened her bedroom door.

The woman told the court that the assailant was wearing a cap but she saw his face and that he was armed with a knife.

She said her attacker had sex with her using a plastic bag as a condom, after she told him — in an attempt to prevent rape — that she has AIDS.

Hepburn, however, maintained his innocence, and, in his defence, told the court that he was at home at the time of the incident.

There were inconsistencies in the evidence of his mother and uncle, who testified on his behalf.

Bruce-Lyle sentenced Hepburn to 43 years in prison — 18 for rape, 18 for aggravated burglary, and seven for wounding — ordering him to serve 18 of those years, as some of the sentences ran concurrently.

On April 21, 2016, the Court of Appeal allowed the appeal against Hepburn’s conviction, quashed the conviction and set the sentence aside, and ordered that Hepburn be retried.

In February 2020, the second trial began before Justice Brian Cottle.

The trial ended on Feb. 7, after a few days of the trial, when one of the jurors revealed that she was related to the investigating police officer.

The prosecutor, Renee Simmons, wanted to dismiss that juror and continue the trial with eight jurors, but Wyllie objected.

Justice Cottle declared a mistrial and ordered that the trial be conducted before a differently constituted court.

The third trial began on May 17, 2021 and Simmons informed the court that a witness in the case had said that he had overheard the jurors discussing the case in the jury room, even before the trial had started.

The jurors were reportedly questioning why the prosecution was proceeding with the matter after so many years.

“Where the crown going with this matter? It is a 2011 matter; it happened 10 or so years ago; this is ridiculous.”

The prosecution felt this was biased in favour of the accused and made an application for the jury to be discharged.

Justice Angelica Teelucksingh, who was presiding, conducted an inquiry into the matter by questioning the jurors about the alleged comment.

Wyllie did not object to the application to discharge the jury, saying that the accused felt, and he agreed, that the jury might have felt pressured to find him guilty to disprove their alleged bias.

On May 20, Justice Teelucksingh discharged the jury based on the allegedly overheard comments from the jury room.

The final trial began on Dec. 7, with Simmons prosecuting Hepburn on charges that:

— on a date unknown between April 20 and 23, 2011, in the same named community, he entered the dwelling house of the virtual complainant as a trespasser with the intent to commit an offence and at the time, had with him a weapon of offence; and,

— on a date unknown between April 20 and 23, 2011, in the same named community he unlawfully and maliciously wounded the virtual complainant.

The defence argued that while the virtual complainant had identified the accused in a police identification parade, there were a lot of things wrong with the ID parade.

Wyllie argued that the description that the virtual complainant gave the police of the assailant in her statement was different from what she gave in her evidence-in-chief.

The trial was impacted significantly by the coronavirus pandemic, with a number of the jurors having tested positive for COVID-19, resulting in the trial having to be adjourned to allow them time to recover.

At one point, the matter was adjourned because the accused man fell ill. However, a PCR test showed that he was not COVID-19 positive.

There were also various adjournments because the prosecutor, virtual complainant and the defence counsel, at various times, were feeling unwell.

The case had also been adjourned for a few weeks to allow two of the jurors to go on vacation.