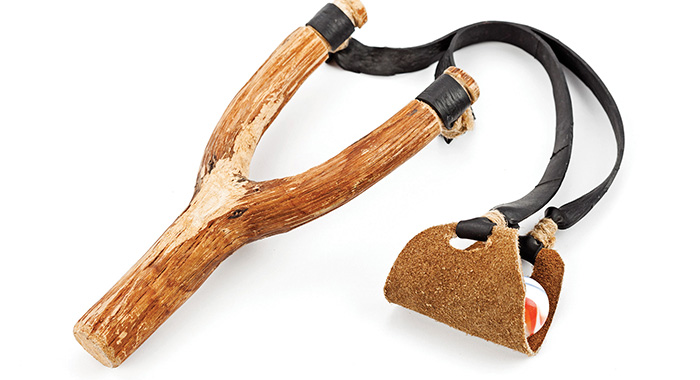 An internet photo of a slingshot.

A Park Hill man who injured a neighbour and damaged a tablet computer with a slingshot was convicted largely based on his brother’s testimony, the court having found that the complainant was “not credible”.

Kenvil “Biggest” Mc Dowall, who told the court that the relationship between him and his twin brother is “corrupted right now”, testified on behalf of the prosecution.

Bailey, the twin’s neighbour, told the Colonarie Magistrate’s Court, sitting at Georgetown, that on March 2, about 7:45 a.m., she was getting ready to go to work when she heard the brothers arguing in their yard.

“I called out to Biggest and asked him if he’s not ready to go to work and he told me Smallest confiscated his file and cutlass.

Bailey said she had under her left arm a black Alcatel tablet that the government of St. Vincent and the Grenadines had issued to her 7-year-old son.

She said that when she bent down to pick up a breadfruit, she heard “bah dap” and felt something hit her on her arm.

“After, I heard like the tablet giving a choop-choop sound. When I looked, the screen was mashed up and the bullet was in the back of the tablet,” she said, referring to the projectile from the slingshot.

Bailey said that as she and Kenvil were on their way to the police station to report the matter, Kelvin told her, “Ah have a mind roll ah big stone on the two of you head going dey”.

She told the court the slingshot had “tension rubber” and the “bullet” was “rusty and brown” and made from what seemed to be half-inch steel.

Bailey told the court that when the “bullet” hit her, her arm became swollen.

When Kenvil took the stand, he began, “I want to tell you, Mr. Pompey.”

“Listen,” Pompey responded, stopping the witness. “This is the magistrate’s court. You’re addressing the court. Not that I want to be high or something but address me as ‘your honour’. Forget about the individual sitting here.”

Kenvil corroborated Bailey’s evidence but told the court that she and his brother had had an argument earlier and she had thrown beer bottles at him.

Bailey had denied this during cross examination by the defendant.

“When I called Jamelia to pick up the breadfruit, I hear something pass me and I say, ‘Jamelia, if that f***er hit me this morning, I will take the cutlass and chop him up.’”

“I see when he blast the second shot and it hit Jamelia on her left hand and tablet.”

Meanwhile, the investigator, PC 982 Lewis told the court that the slingshot was not recovered.

Before sentencing, the defendant, Pompey said that Bailey’s evidence was “not credible”.

“She said she didn’t pelt bottle at you. You must come true and plain to the court; you must come true. I didn’t find her true. She didn’t make full, clean and honest disclosure to the court. Come clean with me! I give much weight to the brother for telling the truth.”

The magistrate said the investigator erred when he did not produce a value for the tablet.

“How can I hold him accountable. I can’t just use a figure from the top of my head,” the magistrate said.

However, Pompey bonded the defendant for one year. If he breaches the bond, he must pay EC$1,000 forthwith or spend four months in prison.

Additionally, on the damage to property charge, he was fined EC$600 to be paid in two months or four months in prison.

Pompey said the defendant would have received a heavier sentence had Bailey been honest with the court.