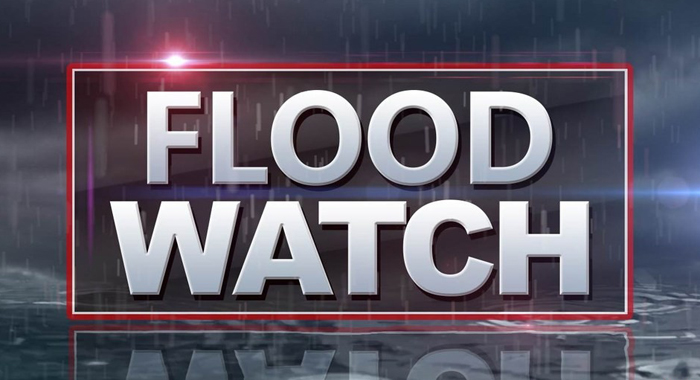 The National Emergency Management Organisation (NEMO), on Monday, issued a flash flood watch for St. Vincent and the Grenadines, until further notice

NEMO is urging residents and motorist in low-lying areas, areas prone to flooding, lahar or mudflows and landslide to be vigilant and exercise caution.

“Residents in the red and orange volcano hazard zones are also reminded that lahar flows within the river system is also possible. Lahars are dense mixture of ash and water which usually occurs during heavy rain and creates dangerous mudflow that can destroy everything in its path as it rushes down the volcano’s slopes and rivers.”

NEMO is urging the nation to continue to monitor and listen to updates from the SVG Meteorological Services and to exercise extreme caution when traversing areas that are prone to flooding.

Forecasters said a low-level trough is encroaching the country and the upper-level environment is expected to become supportive.

“Consequently, cloudy to overcast skies, pockets of light to heavy showers, periods of light rain and isolated thunderstorms are anticipated across St. Vincent and the Grenadines during the next few days,” NEMO said.

“This activity could peak by midweek across the southern Windward Islands including SVG. The latest forecast model guidance suggests rainfall accumulations of 75–125 millimetres (approximately 3-5 inches) with isolated higher amounts in mountainous areas during the next 24-72 hours.”

A flood-watch is issued when conditions are favourable and there exists the possibility of flooding during the watch period.

This flash-flood watch may be upgraded to a warning if conditions warrant.