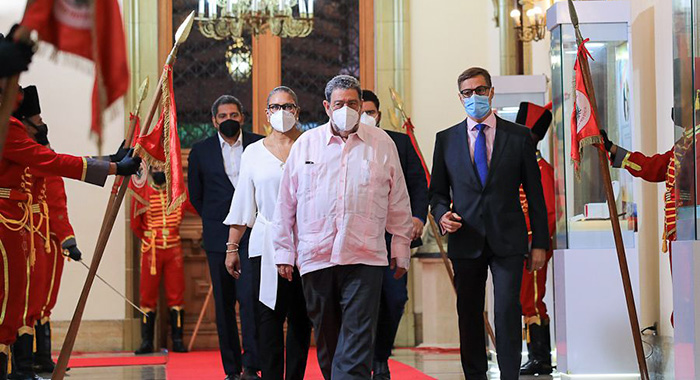 Prime Minster Ralph Gonsalves says he had a procedure on a finger on his left hand in Venezuela, where he spent four days in hospital last week.

Gonsalves returned to St. Vincent on Tuesday, after 10 days in Caracas, where he went on Easter Sunday after falling ill three days earlier.

The 75-year-old leader told a ceremony at Argyle International Airport that he was in “good heath”.

However, the prime minister did not explain the reason for the bandage on his left hand.

He explained the reason for his bandage on his weekly programme on NBC Radio on Wednesday.

Gonsalves said that the finger next to his little finger on his left hand had been stiff.

“And there is a simple procedure of sorting it out. So they did it for me.”

He said that he could not get the “expert” while he was in hospital in Venezuela.

The prime minister said the expert was available on Monday and he had the procedure done then.

“That’s why on the Tuesday when I came I still had it on and I have it today.”

He said that in moving his hand the bandage has gotten loose and he may have to have it redone.

“But by tomorrow it should be gone. And once you do a simple procedure, naturally, you will get an antibiotic to make sure that you don’t get any infection. But the good thing is that the finger moving good…

“So it really wasn’t humbugging me in terms of getting any work done or anything or you going to hold something. It’s just that it was irritating so that is basically what that is about.”