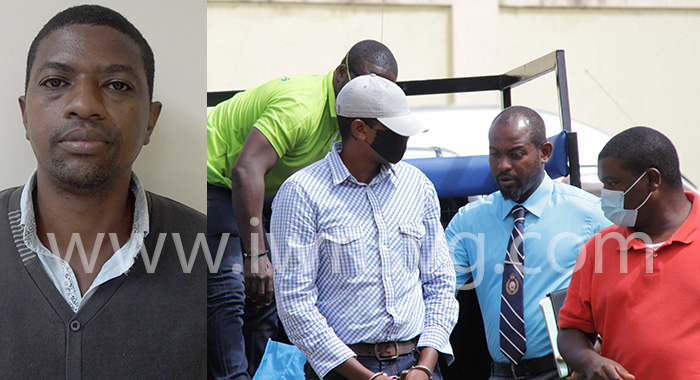 The accused, Reynold Roberts, in cap and inset, is escorted to court by detectives from the Major Crimes Unit on Wednesday, May 4, 2022.

Reynold Roberts, 40, of Harmony Hall, is charged that on May 1, at Harmony Hall, with malice aforethought, he caused the death of his ex-girlfriend, Luann Roberts, of the same address.

Chief Magistrate Rechanne Browne read the murder charged to the accused man, who was represented by lawyer Grant Connell.

Roberts was not allowed to plead to the indictable charge.

The court heard that the prosecution is likely to call 15 witnesses, during the preliminary inquiry, which is set for Sept. 1.

Detective Corporal Marvin Westfield of the Major Crime Unit is leading the investigation.

Roberts’ body was found in her car in Buccament Bay around 9:15 a.m. on Sunday.

iWitness News understands that she was found after a woman who claimed that a man had assaulted her, told her during the alleged assault that he had killed Roberts and left her body in her car.

The information triggered  a major police operation that culminated with the discovery of Roberts’ body and the arrest of the accused in Buccament Bay.

The two Robertses were in a common-law relationship that ended earlier this year,

Roberts’ death was among four homicides in St. Vincent on the Labour Day weekend, taking the tally this year to 14.