Man, 85, scolds thief who snatched his money in Kingstown 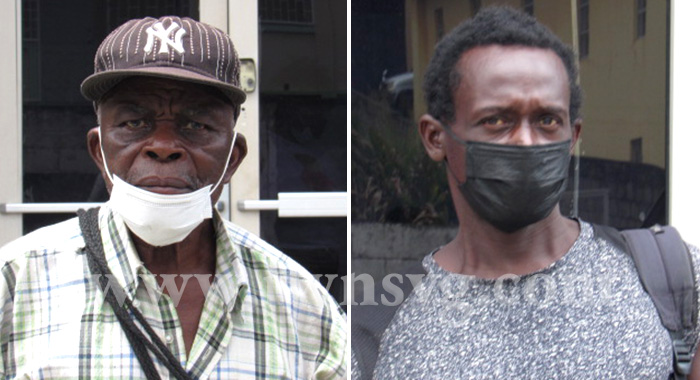 The complainant, Ainsley Derby, left and the defendant, Mannie Saunders.

An 85-year-old man, on Monday, scolded, in court, a 34-year-old man who snatched EC$65 from him in Kingstown last Friday.

“The worst thing to do is make old people cry. … Do not trouble old people, their cry don’t fall apart,” Ainsley Derby, 85, of Spring Village, told the thief, Mannie Saunders, 34, of Town Hill.

“A strong, hearty man like you going and rob an old man like me when you can go and look for something to do!”  Derby further said at the Kingstown Magistrate’s Court.

Saunders was found guilty of a charge that last Friday, in Kingstown, he stole EC$65 from Derby.

Derby told the court that last Friday he was at Kingstown Vegetable Market when he “felt a great bounce” and a hand went into his shirt pocket.

He said the defendant started to run and when he saw the crowd, he changed course, but people ran after him.

Derby said when he got to PH Veira, a police officer had the defendant in her custody.

He said he asked Saunders for the missing money but the police officer invited him to the police headquarters, located a short distance away.

The elderly man, who uses a walking stick, said he worked lands all his life and still does a little farming with his son.

He said it was his first time attending court.

He told the court he never drinks, smokes and he “can’t even shake a leg” but had 14 children by the time he was 40 years old, adding, “I didn’t have no recess.”

Derby said the monies were three $20 bills and one $5 note.

The missing money was not recovered.

Saunders, who said he works on a truck, told the court he walked into Derby but denied taking the money.

He however, told investigator PC 105 Castello, that he was willing to repay the missing money.

He told the court he agreed to repay the money because “they charge me”.

Saunders said he ran when he heard people saying, “Thief! Thief!” because when he passes in the street, people call him “thief”.

Magistrate Rickie Burnett, who was presiding, said he was surprised to see Saunders before the court again so soon.

The magistrate said the defendant was in court the previous week but was not convicted of the offence with which he was charged.

Burnett said he observed that the defendant might need mental evaluation and asked his sister, who was present in court, to seek help for him.

The sister told the court that she had noticed recently a change in Saunders’ behaviour.

The magistrate bonded Saunders for one year in the sum of EC$1,500. If he breaches the bond, he must pay the amount forthwith or spend six months in prison.

He was also ordered to compensate Derby EC$65 forthwith.

One reply on “Man, 85, scolds thief who snatched his money in Kingstown”